Parking ban to be implemented at Gladhouse 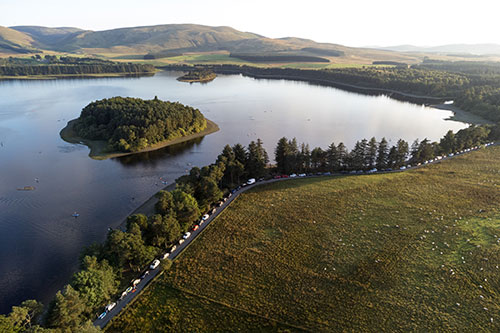 Midlothian photographer and regular wild swimmer at Gladhouse Lee Live took this photograph from his drone at the reservoir which shows cars parked along the northern end of Gladhouse reservoir.

Parking restrictions are to be implemented around the northern end of the Gladhouse reservoir in Midlothian. This means that visitors and users of the reservoir will now find it difficult to park there legally.

“From Monday 11 April, temporary parking restrictions will be in place along part of the U80 Gladhouse Road on a stretch of the road along the northern shoreline of Gladhouse Reservoir. The temporary restrictions will be monitored throughout the period to 2 October and are in response to safety concerns raised by our emergency partners concerning access in the event of an incident or emergency, due to the volume of parked vehicles.

“While encouraging activity and wellbeing, public safety remains the priority. Drivers can still park outwith the designated clearway and we encourage visitors to do so with due care and consideration. As this is an operational and public safety matter, ward councillors were advised of the temporary traffic order as it was issued.”

The map shows the area covered by the Clearway.

Midlothian Conservative Councillor and Provost Peter Smaill is not quite sure that the parking restrictions are the answer. He told Midlothian View:

“Councillors like me who discussed the undoubted problems associated with Gladhouse took away an impression that the proposed Toxside car park would be constructed simultaneously with introduction of parking restrictions.

“The car park will now not happen this year but a comprehensive ban on parking will immediately come in.

“The assumption now being made that the established public demand for access will somehow be able to find alternative parking is highly questionable. The Council does not have the resource in my opinion to monitor and enforce the freeway adequately.

“I understand the demand of locals for their amenity to be considered more important than public access. The emergency vehicle/safety issue applies on many country roads as narrow as this road becomes, and I await convincing evidence on that point that a total parking ban is necessary on this stretch of the road.

“It is a question of balancing interests and right now one group is being heard loud and clear and another in practical terms seems to ignored. We need an equitable and practical answer.”

“It seems that this is the council’s response to an incident whereby an emergency vehicle couldn’t get through the road. Sadly, the newly proposed car park has not been built and so the question is where are all these cars going to go?

“I believe that this is only going to lead to issues between users of the reservoir and residents whom I suspect will become deeply frustrated as car owners block other roads leading to Gladhouse.

“It could be a blessing in disguise as this Clearway will send a message far and wide that Gladhouse is closed. After all, the place was filled with litter and glass last year, folk were defecating on the banks, idiots were chopping down trees for fires and even setting the bank alight, I was told that campervan owners were emptying their chemical toilets into the water.

“But, it’ll be sad for all those conscientious nature lovers who abide by the rights of the Outdoor Access Code and love to swim and paddleboard there as it was the only place with direct access.”

Midlothian View asked Scottish Water for an update on the car park, their spokesperson said;

“Scottish Water understand the challenges around parking in the area. With this in mind we are still working on plans for a new car park. We do not currently have a date for this but will issue an update as soon as we have indicative dates.

“Please be assured, we recognise the importance of accessibility at our reservoirs and are using information from a user survey carried out last year to develop ways to improve the site for visitors.

“We are continuing to work with Midlothian Council, Police Scotland, Scottish Fire and Rescue Service and others to establish ways of providing safe access to the reservoir.”

“Gladhouse Reservoir is a fantastic location for those of the Lothians and Edinburgh to enjoy. It has become something of a lifeline for those living nearby over recent years with the covid outbreak and travel restrictions.

“I was amazed to learn about the proposed ban on parking before a car park could be provided. People have been restricted for long enough. Depriving people of this beautiful place in a time where we are supposed to be encouraging people to get outdoors seems completely unjust.

“As a watersports provider at Gladhouse I have seen some irresponsible people who have caused contention between themselves and the local people who live there and I understand the strain this puts on the local residents.

“However I have also seen thousands of people over the last two years using the place correctly, responsibly and safely. My company has had several successful litter picks at Gladhouse with people invited along to help us look after such a beautiful location and give back to a place that offers so much.

“There has to be a solution however I strongly believe banning parking entirely is not it.”

Celebrating equality and diversity in Midlothian Celebrate the contribution that different groups make to their communities by getting involved with Equal Midlothian Week, 4-9th March 2019.

A range of organisations working on equalities issues will be holding events during the week to highlight the work they do to create a fairer, more inclusive Midlothian. This includes sessions about cultural awareness, disability, mental health, kinship care, domestic abuse and LGBT issues.

The week culminates with the Midlothian Mela event in the The Gorebridge Beacon (Hunterfield Road, Gorebridge, EH23 4TT) on Saturday 9th March. This annual event features music, dance, artistic performances, workshops and food. There will also be activities for adults, young people and children. Come along to this family friendly event and celebrate the work people do on equalities in Midlothian.

“Find out more about equalities work in Midlothian by popping in to some of the free events being held during the week. Not only will you get to find out more about Midlothian’s diverse population but you will also have an opportunity to meet new people. The highlight of the week is the Mela which has become a popular annual fixture. This event for all ages and interests provides a great opportunity to socialise.”

You can see the full programme at www.midlothian.gov.uk/equal-midlothian

Equal Midlothian Week in Midlothian is supported by the Midlothian People’s Equality Group and Health in Mind.

Put your green stuff in your neighbour’s brown bin

Residents will be allowed to ‘share’ recycling bins with their neighbours once a new collection fee is introduced by Midlothian Council.

The council is preparing to become the second local authority in Scotland to charge for garden waste collections from March next year.

But with only 50 per cent of residents expected to take up the new £35 annual fee, the local authority is proposing a range of measures to cope with the expected backlash.

They include allowing people to do deals with neighbours to share a brown bin, cutting the number of visits they can make to recycling centres with vans or trailers each year in half and hiring a full time delivery driver whose sole job will be replacing and repairing damaged bins.

In a report on the changes to the service, officials said “Residents can share a bin with a neighbour/s, but one person must pay for the service and the bin will be collected from one address.

“Any sharing agreement is a private matter and does not involve the council.”

The local authority said that based on the experience of Angus Council, the only one in Scotland with an established chargeable garden waste service, they expect only half of the 38,000 households who currently have a brown bin to keep it once the fee is introduced.

It also expects around 10 per cent of the 6,280 tonnes of garden waste collected over the last financial year to be dumped in its grey bins, which are collected free of charge and are for non-recyclable items.

Concerns over an increase In local “man with a van” services charging people to collect their garden waste and taking it to the dump for free, the local authority proposes to reduce the number of visits households are allowed with a van or trailer from 12 times a year to just six.

They also plan to make all vans and trailers book in advance rather than just some over a certain size to “remove the risk that van users start to use smaller trailers”.

They also intend to employ a deliver driver to deal with bins which are damaged because people overload them or need replaced quickly.

They said: “As a chargeable service customers will expect rapid delivery of a replacement bin.

“To ensure the timely delivery it is proposed to recruit a dedicated delivery driver with responsibility for bin delivery and bin repair.

“Their role will not be devoted to brown bins only, but will deliver, repair and replace all waste and recycling containers.”

A report to Midlothian Council reveals it is anticipated the new charges will generate an income of £550,000 in its first year after costs.