38 youths charged in relation to bus vandalism and violence 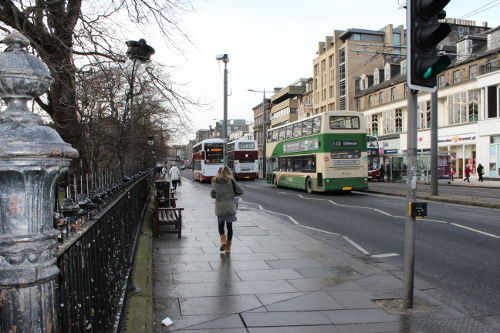 A police sting operation, targeting antisocial behaviour and violence towards Lothian Buses drivers, has resulted in 38 children and young people being charged with offences.

Police Scotland’s ‘Operation Proust’ has identified 127 incidents relating to the abuse of Lothian Buses drivers and vehicles, and has been seeking to crackdown on a wave of vandalism and violence which has seen bricks thrown through bus windows.

In March, antisocial behaviour escalated to the point Lothians Buses had to suspend services after 7.30pm.

Now, Police Scotland has revealed 38 children and young people have been charged in relation to the attacks.

“These incidents impacted all aspects of our local communities, not just drivers and passengers but also the wider public through service disruption and the withdrawal of services from key routes on a number of evenings in March and April.

“The criminality involved included objects being thrown at buses while in transit, young people holding onto the rear of buses whilst the vehicle was in motion and interference with engine compartments whilst vehicles were stationary.

“Over the six week period of the operation, 127 incidents relating to Proust were investigated and 38 children and young people were charged with a variety of offences.”

The operation involved officers patrolling on buses, in vehicles, and on foot in areas affected, and last week Police Scotland revealed it had been deploying a decoy bus in Midlothian to try and catch vandals in the act.

The report continues: “The operation had two key aims, namely the co-ordinated investigation of incidents, ensuring a consistency in approach across the city, and to achieve a long term change in behaviour through prevention and early intervention activity.

“This latter aim was the cornerstone of Operation Proust, and activities delivered included the following: presentation of educational inputs to S1- S3 pupils at 24 schools across Edinburgh by Lothian Buses and police; creation of diversionary workshops as part of the restorative justice process which will see young people attend at Lothian Bus Depots in a planned programme of events to educate and change behaviours; engagement with youth service providers to embed prevention and diversionary activities relating to transport anti-social behaviour in future work; and the completion of environmental audits in known hot spot areas across the city with commitment to undertake recommendations from Community Improvement Partnerships.

“To assist in the delivery of a more strategic approach to these issues, a city wide Community Improvement Partnership was established in April.

“In the four week period since the operation concluded, recorded incidents have fallen by 80%.”