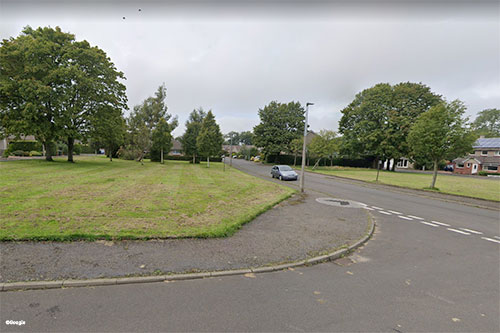 The application site on the corner of Dalmahoy Crescent and Turner Avenue in Balerno.

Plans for a 5G mast in the middle of a residential area have been thrown out by Edinburgh City Council after more than 30 people lined up to slam the “intrusive structure.”

Network provider Three submitted a pre-planning application to the local authority for the 50 foot-tall phone mast and three control boxes to be built on the corner of Dalmahoy Crescent and Turner Avenue in Balerno.

Residents lodged objections to the proposal describing the move as “lazy planning” and voicing concern it could impede driver views – endangering children crossing the road.

Three said the 5G signal pole would bring “significant connectivity improvements” to the village and described the application site next to a junction turning into a housing estate as “the single most appropriate location.”

Planning officers noted in a report the equipment would “fill a gap” in the area’s mobile network coverage.

However, those living nearby hit back at the plans and demanded that the applicant find an alternative site.

In total, the council received 34 objections and no letters of support for the mast.

Dalmahoy Crescent resident Louise Mitchell-Banks said it would “adversely impact the look and feel of the area,”adding: “It will dominate the centre of a well established estate and will not be in keeping with the area.”

Gerry Coyle, of Turner Park, called it an “intrusive structure” and said there are “numerous locations in the vicinity far better suited to the sympathetic installation of this infrastructure and which would be far less damaging to the local environment.”

He added: “While the location may be easier for the company, this smacks of lazy planning, with no consideration of the environmental and amenity impacts on residents.”

David Kenyon, who lives on Dalmahoy Crescent, said: “The proposed 5G mast will have a significant detrimental effect on the look of the residential estate being placed in a highly visible location in a green area in the centre of the development with no mitigation on its visual impact.

“There is no demand in the local population for such an addition and there seems little sense in placing such a mast at the edge of a village.”

In his objection, local councillor Ricky Henderson said he was “not objecting to 5G provision in this area” but stressed the need for “more thought to be given to an alternative site location and consultation with local residents.”

He added: “The site proposed is well used by local children and the equipment could affect sight lines for vehicles / road crossing.”

Others shared councillor Henderson’s concerns, with Dalmahoy Crescent resident Susan Kirby writing: “The cabinets would obstruct the view from the junction from drivers and make it potentially dangerous for children crossing.”

June Finn, also of Dalmahoy Crescent said: “This is a small very busy junction that must be used to enter and leave the estate and nothing should be erected here which would interfere with clear vision by drivers, and by children who regularly play on the green space.”

Upon consulting with Transport Planning, the council was recommended to reject the application due to “road safety considerations.”

Planners refused Three prior approval for the mast, which they said “may adversely affect the sightlines of motorists and pedestrians approaching the junction between Dalmahoy Crescent and Turner Avenue.”

Three stated in its application: “In these unprecedented times of the Covid-19 pandemic, it is recognised that high-speed mobile connectivity is the lifeblood of a community; facilitating educational benefits, providing access to vital services, improving communications with the associated commercial benefits for local businesses, enabling ecommerce and working from home, as well as enjoying access to social, media and gaming for leisure time activities.”