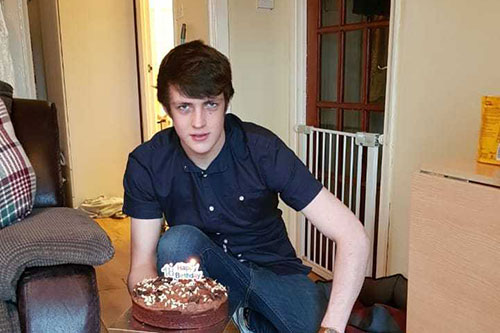 Nathan Hadlow on his 18th birthday.

“He never intended to kill himself, he was so used to doing this he never thought he would probably die – he was self-medicating.”

Nathan Hadlow, of Deans, was just 20-years-old when he died after taking illicit ‘street valium’ – the latest in an explosion of deaths in Edinburgh and the Lothians linked to benzodiazepines.

His mother, Tracy Hadlow, an NHS clinical support worker, was awoken by police on the night of Tuesday March 16, to be told that her son had died in his sleep – just two streets away from her home in West Lothian.

“The night he died I’d just finished a twelve hour shift at the hospital,” Tracy said.

“He had been staying just two streets away from me, he’d been sleeping, and they’d been taking street valium.

“The boy he was with woke up, and Nathan didn’t.”

Tracy, a mother of three, buried her son on Wednesday.

She wants the sight of her son’s coffin to spark a reaction to the new pandemic of drug abuse in Scotland.

Benzodiazepines, both the prescribed diazepam (often known by the brand name Valium) and the illicit ‘street version’ etizolam, now account for more overdoses in Edinburgh and the Lothians than heroin.

In 2019 alone, 109 people died in the city after taking benzodiazepines.

Social workers, politicians, and addicts themselves all paint a picture of a new pandemic growing in the city’s youth population – self medication, using illicit street valium, to fill the gap left by underfunded and overcrowded mental health institutions.

In attendance at Nathan’s funeral was Aidan Martin, an inspirational addiction and advocacy worker who overcame his own drug abuse problems and now helps others through his work as a social worker.

Aidan, the author of addiction memoir ‘Euphoric Recall’, says a generation of Edinburgh citizens are being left to drug addiction, crime, and premature death due to being failed by mental health services.

“My view on addiction is that it’s a social issue – it’s a deep-rooted social issue and it’s not specifically about the drug, but we do have periods where there are certain problem drugs, like what we’re having now with the street valies that are so dangerous.”

“Trauma, social inequalities and lack of education at high school play a role in addiction – it’s severe mental health issues, and a lack of therapeutic services that are available to people on the NHS.

“People are self-medicating, there are no same day services – there are waiting lists that are between a year-and-a-half and three years.

“In my street, a whole bunch of my neighbours are using it. That leads to criminal behaviour, and they get tied up in the criminal justice system, and it’s a perpetuating cycle.”

Also in attendance at Nathan’s funeral was Neil Findlay, a Labour list MSP for the Lothian region, who is standing down after this May’s election.

“Everybody knows Scotland has the worst drugs deaths crisis in the developed world. The reality is, that on the ground, in communities, people are dying every single day because of a lack of services,” Mr Findlay said.

“If you are in crisis now, then you will wait up to two years in the Lothians to see a psychologist.

“People in this situation need professional, therapeutic intervention and rehabilitation and yet there is not a single rehabilitation bed in some parts of the Lothians.

“The Scottish government tells us that they are now taking this seriously, but on the ground it is very difficult to see evidence of that.”

In the last 10 years the number of drug related deaths has more than doubled in Edinburgh and the Lothians from 73 deaths in 2010 to 155 deaths in 2019.

A former benzodiazepine addict, William Anderson, 50, says his estate in the Lochend area of Edinburgh has become so rife with illicit valium that every two or three doors is a dealer – and children as young as 15 and 16-years-old are selling and taking etizolam.

William says he was first prescribed diazepam when he was 21-years-old – leading to a lifetime of dependency on benzodiazepines.

“That went on, prescription wise, for 25 years,” William said.

“About two and a half years ago I was stopping over at a friends house, and we’d bought the same tablets, the same street valium.

“Unfortunately, I woke up in the morning and she didn’t. That made me spiral out of control even more.”

In the capital, William says, the ‘Trainspotting generation’ is giving way to the benzos generation.

“It’s unbelievably bad in Edinburgh,” William continued, “In the area I’m from you can go every two or three doors and somebody is selling these etizolam tablets.

“The people that are living in the estates up and down the land, they are living in poverty, along with depression, and a lot of people are selling them to feed their kids, or taking them because they can’t handle their depression and mental health.

“It’s that cheap I was getting a hundred of them for £15. That was a year and half ago in a B&B in Leith Links.

“I personally know 15 and 16-year-olds selling and taking street diazepam. It’s a vicious circle and it seems to have become, over the last two or three years, a part of everyday life.”

Paul, a former heroin and benzodiazepine addict, turned his life around and joined the Scots Guard – and has published a book, ‘Heroin to Hero’, about his journey.

He now helps other addicts by reaching out on Facebook and filming motivational speeches.

“I actually had a message this morning from a girl who has mental health problems,” Paul said.

“She was passed pillar to post, and that’s such a common occurrence. It’s difficult, especially in lockdown, mental health is down on its knees.”

Back in West Lothian, Tracy Hadlow is now left to mourn for a son who was failed by health and social services.

“Nathan was a likeable lad, he was well known in Deans, where we lived, he was well thought of and a lot of my friends and colleagues at work knew he was on a bad path but over the last six months it was a really dark path – we knew he was going down that road,” she said.

“For another parent of someone who is struggling with this, I would definitely push the hardest to try and help them. Be there for them.

“Sometimes I would get really exasperated with Nathan, and get really annoyed – but it isn’t about that.

“These people steal out of your homes, but you have to keep supporting them, you must never give up on them.”