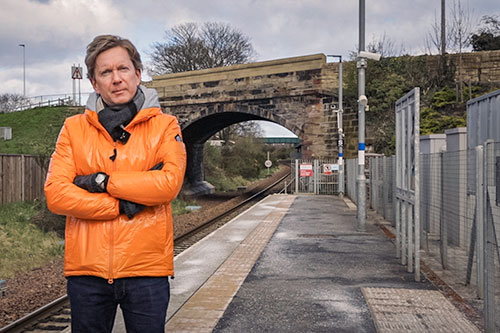 Midlothian View Holyrood Challenge: This View has been written by AC May, the Scottish Liberal Democrats's candidate in the Midlothian South, Tweeddale & Lauderdale constituency for the Scottish Elections on Thursday May 6th 2021

In the first of this series, I wrote about Early Years, and followed it up last week with a piece on Young People. This week, in the third of this four-part series, I want to move on to issues affecting Mid Life.

It’s quite telling that the term ‘Mid Life’ is almost invariably followed by the word ‘Crisis’. With the pandemic turning our world upside down – along with our assumptions – this is now truer than ever. Over the past year we’ve faced job losses, job insecurity, furlough, working from home, businesses closed (others barely holding it together), while many businesses and the newly self-employed got little or no support at all. On top of this, parents faced home schooling responsibilities, and those with older family had the worry and estrangement from their older loved ones. COVID claimed lives. Over 10,000 in Scotland alone. It all takes its toll. In the Scottish Parliament, the Scottish Liberal Democrats pushed for acknowledgement of a Mental Health Crisis. This by itself is just recognition of the problem – we then followed this up by securing an extra £120million for mental health in the Scottish Budget.

Before I go any further, I should point out that there are many people who never even make it to this stage in life. Drugs deaths in Scotland are not only the worst in Europe, but now in the western world. We seek urgent reform not just in policy, but in the scale of addiction service provision. Some kids and youngsters are afflicted by life-shortening conditions – I could write a whole article on what needs done better in Scotland, but I could never do it as well as CHAS in their 2021 manifesto.

Fuel poverty and the reliance on food banks are very real problems, which have grown across Scotland and the UK in the past 5 years. We simply don’t have enough social and affordable housing. Much of our housing stock is in poor condition, and not suited to the heating and insulation challenges of the Scottish climate. Housebuilding is driven by property developers and their shareholders; we need homes built to address the needs of the people of Scotland. We need action on all of this now.

This is the direction we need to go – this is our green recovery. The green economy is the future for our workforce. We’ve been through coal mining, North Sea oil, and now renewables. I was recently asked by a constituent about reducing Scotland’s carbon footprint – and his point was that the cost of many such approaches – home insulation, double glazing, heat pumps, converting to solar panels or electric vehicles – remains in the exclusive reach of the better-off. We will never tackle the climate crisis while that remains the case. As well as market forces, we need significant government incentive schemes to facilitate the switch, and help our workforce to retrain for these new industries. We need government to focus and deliver on renewable energy, and the jobs that go with it, so that every time we flick a switch in our homes, we can be sure it’s not killing the planet. The Scottish Liberal Democrats are championing policy initiatives in all these areas.

The Liberal Democrats formed in 1988, with a heritage from the Liberal Party and the SDP. That was 33 years ago. The environment, green issues – the Amazon rainforest, the ozone layer, global warming, carbon footprint and now the climate crisis – these have been the language of the Liberal Democrats since its inception. It’s integral to who we are. I’ve heard it said that we are ‘the UK’s biggest green party’, and that’s not wide-of-the mark.

Today we all need to be more mindful, more responsible for our actions – both to the planet and our fellow human beings – recognising, respecting and celebrating diversity and our universal human rights. It can be hard work being an adult in 2021, but if we put recovery first, it can once again be a great time to be alive.