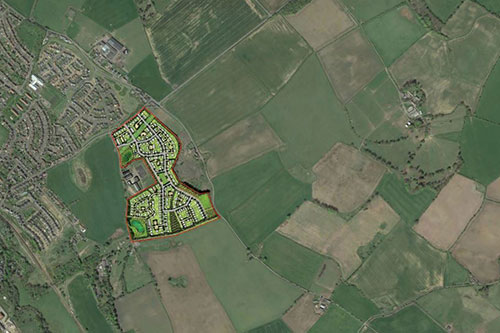 The site on the outskirts of Gorebridge.

A bid to build 308 houses on prime agricultural land on the edge of a Midlothian town has been rejected by Scottish Ministers after the plan was described as an “undesirable incursion” on the landscape.

Hallam Land Management appealed to the Scottish Government to rule on their plans for new housing on the outskirts of Gorebridge after Midlothian Council’s planners took too long to make a decision.

However their claim they should be able to build on the land because house building targets are not being met in the county was dismissed by the Scottish Government Reporter.

Instead he said that targets for housing requirement were no longer valid under the current South East Scotland Plan (SESPlan), which set them out as a five year plan for councils and runs out in 2024.

And he said since the Scottish Government’s National Plan Framework 4 (NPF4), which will set new targets, is still a draft paper, no alternative was in place.

The Reporter said: “The absence of a sufficiently up-to-date housing land requirement in my opinion represents a failure of the plan-led system.”

Hallam had argued that Midlothian’s house building target of more than 12,000 homes under the SESPlan had fallen behind and nearly 5,000 homes would need to be built by 2024 to meet it.

The Reporter acknowledged that it was “inconceivable” that the target would now be met in time.

But he said the NPF4 which could be adopted later this year would set out new targets and they could be significantly less than previously set.

And he raised questions about whether the failure to meet house building targets could be eased by releasing more land or whether other factors such as the pandemic had been a factor.

He said: “In practice I am rather sceptical that supply is to blame for the under-delivery of new homes in Midlothian.

“Given the rate of delivery has been less than expected (and noting the various other influences which have affected build-out rates and/or the uptake of sites in this period) I have difficulty with the notion that a release of additional sites would have led to any notable increase in completion rates.”

The proposed new housing estate would be accessed off Lady Brae in the town, which drew some objections from local residents and the council’s own transport consultant who pointed out the road only has a single hourly bus service and additional housing would ‘intensify’ traffic and could cause congestion at peak hours.

The Reporter raised concerns about the elevated site’s impact on the rest of the town and surrounding landscape.

Refusing the appeal, he said: “I find the proposal would represent an undesirable and excessive incursion of development in a highly prominent part of the landscape, giving rise to significant adverse landscape and visual effects to the detriment both of the character of Gorebridge and its setting, and by virtue of the development’s influence upon wider areas of countryside.”