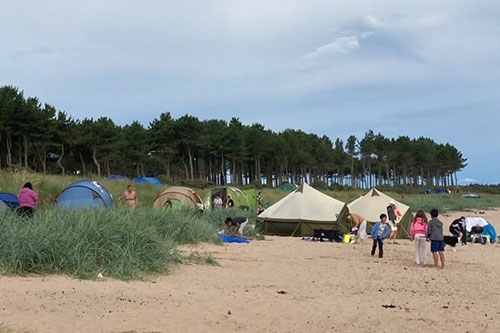 Visitors to a busy beach resort were left crossing their legs at the weekend after the toilets had to be closed because of blockages.

Public toilets at Yellowcraig, East Lothian, became blocked as people ignored the rules and flushed wipes down the loos.

By mid-morning on Saturday countryside rangers had closed the toilets and took to social media to urge people to visit neighbouring beaches and coastal spots to seek relief.

East Lothian is seeing record numbers of visitors to its beaches this summer and nearly doubled its team of rangers to help monitor issues at the sites.

For the second weekend running more than 200 parking fines were issued at the beach car parks.

At Yellowcraig the toilets remain closed as contractors are being brought in to unblock the system which operates with a septic tank.

There was angry reaction to the news the toilets had been closed with some people on social media reporting people urinating in the car park and emptying chemical toilets from campervans down open drains.

One local resident said: “It’s not just tourists that are restricted, it’s locals as well. We have had enough of this, this is literally spoiling summer for families.”

East Lothian Council said that the issues at the toilets had been caused by people failing to dispose of wipes properly.

“The toilets at Yellowcraig were closed on Saturday mid-morning due to a high volume of wipes which had blocked the sewage system.

“Contractors are currently in attendance undertaking the remedial work and we hope to reopen soon.

“Due to its rural location the system operates on a septic tank so it is especially important that wipes and other unsuitable materials are not put down toilets.

“There have been extensive national campaigns by Scottish Water and others highlighting that wipes should not be flushed and we would ask all users to follow this essential guidance.”