BEAR Scotland is gearing up for winter in the South East 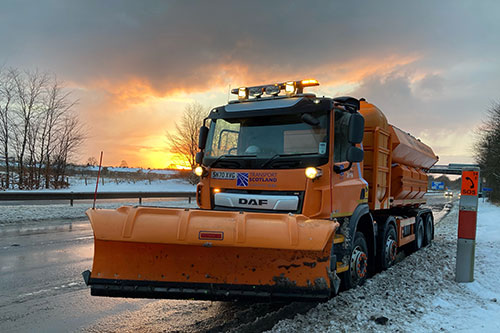 BEAR Scotland and its well-loved team of gritters are geared up and ready to tackle Scotland’s infamous winter weather as temperatures drop.

In South East Scotland over 90 operatives and 25,000 tonnes of salt will be dedicated to keeping the 505km trunk route network as clear as possible over the winter period.

A total of 47 winter vehicles, including 21 eight-wheeler 32-tonne spreaders, will be on hand to keep the region’s trunk roads safe and clear. Some of the largest spreaders operating in the UK, including the ‘BFG – Big Friendly Gritter’, ‘License to Chill’ and ‘Polar Patroller’ – all named by local primary school pupils – will be covering the patch.

The four major bridges over the Firth of Forth – Queensferry Crossing, Forth Road Bridge, Clackmannanshire Bridge and Kincardine Bridge – will be treated with the chemical de-icer potassium acetate to avoid causing corrosion to steelwork.

Central to BEAR Scotland’s winter strategy is its 24/7 winter control room, which analyses detailed weather forecasts and data from 39 roadside weather stations in South East Scotland to ensure appropriate treatments are carried out as necessary.

“Our dedicated team remain as committed as ever to keeping Scotland’s key routes open and safe for motorists over the winter period.

“We will closely monitor conditions on a 24/7 basis and do as much as possible to mitigate adverse winter weather that we’re faced with. We’d like to remind members of the public to also play their part and ensure vehicles are well maintained and pay close attention to local and national media and online information to help plan ahead.”

Members of the public can track gritters on the trunk road network in real time, using Transport Scotland’s online ‘trunk road gritter tracker’. It displays the current location of gritters across Scotland with a trail showing where they been in the past 24 hours.

The winter service period typically runs from 1 October to 15 May each year and can be extended beyond these dates should conditions dictate.