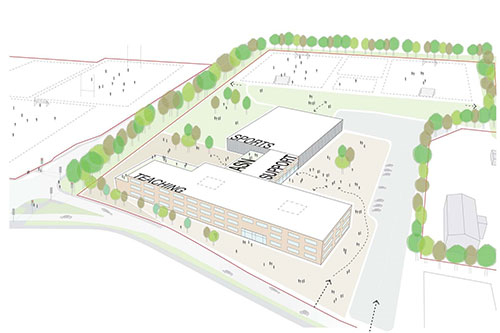 An outline drawing of the new A701 corridor high school.

Beeslack High School replacement has had its school roll increased by a third before a single brick has been laid.

However a meeting of Midlothian Council was this week asked to allow a change to plans to raise the capacity to 1,600 pupils after officers said delays to the build due to the pandemic meant it would need more places sooner than originally believed.

A report to councillors said a consultation on changes to the catchment boundaries would be carried out at the start of next year adding the larger Beeslack replacement school would help ease pressure from Lasswade High School.

The new secondary school, which will be built at Easter Bush, was initially due to open in 2024 with additional space to increase its size projected for the future.

But a report to councillors said projected school rolls from surrounding areas made it clear the extra places would be needed within a couple of years of it opening.

Fiona Robertson, the council’s head of education, said: “If the replacement school is built to the current proposal of a 1,200 capacity, our roll projections show that a further extension would be required within two years.”

She added in her report that an extension would “not only be costly, but also cause disruption to pupils, staff and the school community”.

Councillors agreed to the increased school roll for the new school.

Councillor Ellen Scott told the meeting: “Increasing capacity now while the school is still in the planning and design stage will certainly ease accommodation pressures on other schools, avoid pupil disruption and pre-empt any existing and inflationary costs of an extension.”

The increase in the school roll was unanimously approved with a report on the business case and costings expected to be brought back to council next month.