Black Diamond FM radio set to grow on its success 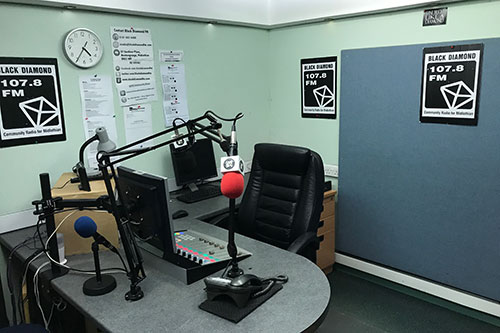 Black Diamond FM is set to mark 15 years of success as a charitable radio station by launching a new frequency and widening its reach across Midlothian, Scotland.

Set up in 2006 by a team of volunteers, this fast-growing community radio station has been promoting social inclusion and various educational initiatives ever since.

Now an integral part of the local community, Black Diamond FM is set to get even bigger. And it is hoped the inevitable expansion in listeners will allow the volunteers behind this noble venture to help even more local people.

Humble yet ambitious is a good way to describe this altruistic broadcasting organisation. Based in the former mining village of Newtongrange in Midlothian, the station takes its name from what was once the area’s biggest commodity — coal. Black diamonds form over many years due to the influence of the surrounding environment, and the same could be said about Black Diamond FM.

The story behind this community-based radio station is an inspirational one. Since being granted a Community Radio licence by Ofcom in 2007, the small group of local volunteers behind Black Diamond FM have managed two incredible feats. Not only have they helped countless local people through various charitable initiatives, but they’ve also turned what was once a CD player in a room into a major Scottish broadcasting institution.

Every live show now comes from a modern broadcast studio. And the technical minds at the station have developed a flexible blended broadcasting model that brings together live studio shows, recorded segments and voice tracking. Presenters are also able to host shows live from home, allowing a wider selection of the local community to take part.

Black Diamond FM is very much a radio station by the people, for the people. Serving the Midlothian region 24 hours a day, seven days a week, it broadcasts an eclectic mix of community-focused content and specialist music programmes.

While no genre of music is out of bounds for Black Diamond FM presenters, there’s a particular focus on reggae, classical, dance and country. A healthy dose of modern and classic pop music ensures there’s something for everyone.

But despite critical and commercial success, this fast-growing Scottish radio station has never lost sight of its responsibilities to the people of Midlothian. Black Diamond FM presenters still take the time to showcase local singers, songwriters and bands — launching careers and helping young artists to forge careers in the industry they love.

Midlothian’s community radio station has come a long way in just 15 years, but the same spirit that inspired the station’s creation still pervades the organisation. Board members Chris Mackrell and Gordon Clayton, along with Mid Morning presenter Geoff Ruderham, were part of the original steering group that set up Black Diamond FM in 2006. Their continued presence has been a source of inspiration for those who’ve since arrived at the station.

Chairperson of the Board Steven Horsburgh is excited about what the future holds for Black Diamond FM now the station’s audience is set to get a lot bigger. He said: “This is a new era for our humble community radio station.

“Black Diamond FM was set up by local people who wanted to make a difference. We didn’t do this to make money or become superstar DJs. We started this journey because we wanted to make Midlothian a better place.

“In 15 years, we’ve helped countless local people through our various educational and social inclusion programmes. And if we’ve managed to entertain people along the way, that’s a huge bonus.

Black Diamond FM broadcasts every day on 107.8FM and now on the new frequency of 100.7FM — giving the station its biggest ever potential audience. Listeners can also tune in online via the ‘Listen Live’ function on the Black Diamond FM website and smartphone apps.

This Saturday the radio station is inviting the local community to come along and celebrate with them as they host an open day at Newbattle Community Learning Centre to celebrates the 15th anniversary of its first live programmes.

Join them for tea/coffee, fun, games and more at the home of Black Diamond FM, Newbattle Community Learning Centre in Newtongrange.