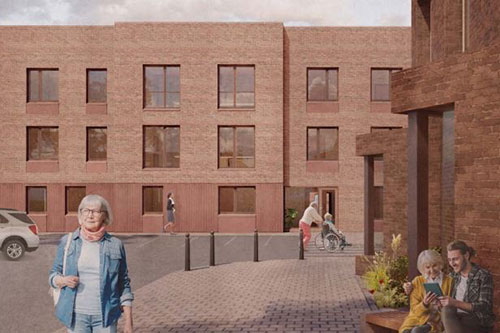 Plans for a new council-owned care village on the site of a former primary school received just one objection over a lack of fencing.

The proposals for the former St Mary’s Primary School in Bonnyrigg have been put forward by Midlothian Council and will see 46 extra care homes built on its site with a car park separated from neighbouring residents by a hedge.

But while they have been widely welcomed by the community one concerned resident called for more protection for houses backing onto the site which she said would be at risk from exhaust smoke, intruders and accidental collisions.

In response to the proposals the objector said beech hedging had been mentioned as a barrier between the houses and the new housing.

But she said: “This would offer poor protection from exhausts of reversing vehicles and accidental damage from collision.

“Where the boundary borders on the gardens of the extra care facility and the planting at the other end of the car park there is little protection from intruders which the school building provided.

“I suggest a sturdy fence or wall be built along the boundary of the site and the walls of Union Park gardens. Failing this a mature hedge of pyracantha or hawthorn be planted as a deterrent although it will provide little protection from damage.”

The extra care housing will sit next to a 30-bed care home and 10 rehabilitation flats and a day care centre which will be built on neighbouring land which housed the Dundas Buildings before they were demolished.

The project has received support from Bonnyrigg and Lasswade Community Council who said it would be an asset to the town centre although concern was raised over parking.

They said: “The community views expressed to us are on the whole very positive and welcoming of this development. The facilities and the employment it should bring to the town centre are seen as an asset for the town.

“We are supportive of the ’20 minute neighbourhood’ concept and while Bonnyrigg & Lasswade is too large to be one neighbourhood this is a step in the right direction with these facilities being within walking distance for many.”

A report on the planning application which is recommended for approval by officers, say the care home and flats are Intermediate Care Facilities (ICF) intended to replace Highbank in Dalkeith which no longer meets modern care standards and practices.

It says: “ICFs provide a bridge between hospital and home and vice versa. They provide space for rehabilitation, assessment, interim placement, emergency support and respite care. Such facilities provide a vital role in minimising the duration of hospital stays and maximising the length of time that people can continue to live at home for as long as possible.

The proposed ICF will provide accommodation in 30 individual bedrooms and 10 one bedroom rehabilitation flats. In addition to the accommodation spaces the building will include lounge spaces, dining rooms, rehabilitation rooms, a café/hub space, a catering kitchen, laundries, offices and staff meeting/training spaces.“

It adds the extra care housing is “an alternative to residential care for frailer older people or those diagnosed with a variety of degenerative conditions.

“It offers an opportunity for residents to live in their own flats which have been designed to facilitate easy delivery of care in a domestic setting.

People will be able to walk into the care village from Polton Street in the town with 48 parking spaces on the site accessed from Moorfoot View.