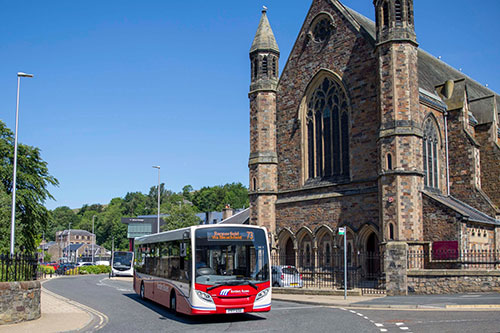 Bus passengers in the Borders are on the road to a ten per cent hike in fares before the end of this month, it has been announced.

Borders Buses is planning to increase its fares from Monday 29th August.

Company bosses say they had been left with “no alternative” but to make the move as the result of rising operational costs.

A company spokesperson said: “Like many businesses, our increase in ticket prices is a direct impact of rising operational costs and we have been left with no alternative than to introduce a fare increase.”

Additionally, the company has announced it will be launching app tickets of bundles of 3 (24hrs) and 5 (24hrs) and scrapping the 24-hours (four people) ticket.

The cost of the Borderless Weekly ticket which offers unlimited travel across the full network, including Carlisle, the Scottish Borders, Berwick, Lothian and Edinburgh will rise from £41.99 to £46.19.

The cost of the Borderless Single ticket which includes any distance across the full network will rise from £4.75 to £5.25.

The cost of the 24 Hour ticket offering unlimited travel across the full network will rise from £8.40 to £9.25.

The spokesperson added: “In recognition of new travel patterns we are launching app ticket bundles of three (24hr) and five (24hr) and will be removing the 24-hours (four people) ticket.”