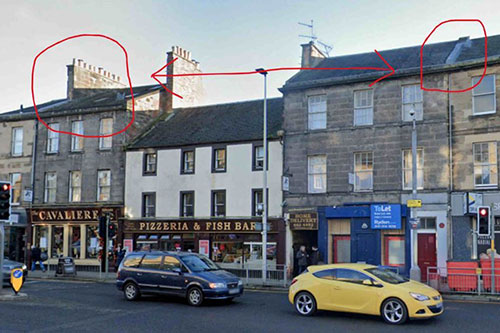 The chimney stacks of the Cavalier Restaurant and neighbouring buildings with their stacks removed.

A bid to remove a disused chimney stack from a town centre building has been rejected after planners ruled they were a part of the character of the area.

Restaurant boss Antonio Crolla applied for listed building consent to remove the stack above Cavalier Restaurant, on Dalkeith High Street, saying it was in poor condition.

However Midlothian Council’s planners refused the application after insisting the chimney stack could be repaired and removing it would harm the character of the building.

Applying for approval to remove the chimney stack, Mr Crolla included a report from a structural engineers which confirmed none of the flues were live and the stack was redundant adding “there is no practical or structural reason for reconstruction”.

And he pointed to the removal of a neighbouring stack of chimneys which had gone ahead.

However planning officers said the neighbouring stack appeared to have been removed before 2008, according to Google Maps, and its removal did not justify taking down the applicant’s stack.

And they said there was no evidence that the chimney stack was beyond repair which would be preferable for the listed building.

They said: “It has not been evidence to the satisfaction of the planning authority that the repair of the chimney stack is not possible.

Refusing listed building consent to remove the stack, planners said: “The complete demolition and whole removal of the chimney stack will significantly detract from the historic character and appearance of the listed building.”