Co-op has plans for a new store at Shawfair 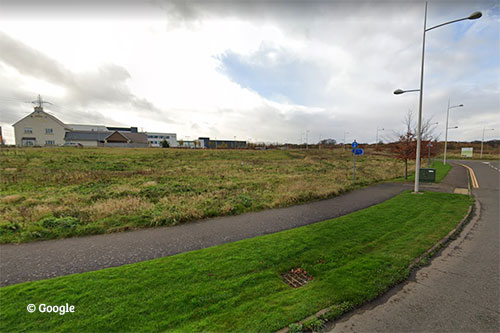 The proposed site in Shawfair Park for the new co-op store.

Around 3,000 people could use Shawfair Park every day once it is fully operational, according to food giants the Co-op.

The shop chain wants to build a new store at the business park, despite already having a branch just over 800 metres away.

And in a planning application to Midlothian Council the Co-op insists the number of potential customers which will come through Shawfair mean it can sustain a second store in the area.

Concern that the Co-op’s plans for a store in the centre of Shawfair would lead to the closure of its Danderhall shop had been expressed by the local community when proposals were first put forward.

Addressing the issue the Co-op said it was their intention to keep the Danderhall store open.

It said: “This currently serves residents of Danderhall and it is not anticipated that the residents will change their shopping habits as a result of an additional store opening at Shawfair Park.

“It is anticipated that the new shop at Shawfair Park will primarily serve employees and visitors to the business park and it is unlikely that people will visit the store from other Midlothian towns.”

A report on behalf of the Co-op to council planners estimates that there are currently around 1,220 people using or visiting Shawfair Park daily and that it will increase to 3,000 as more firms move into the site.

The new store will create up to 20 new jobs and have anti-ram bollards at its front entrance with an ATM installed.

Initial reaction to the news of the store on social media saw concerns about having another Co-op so close to another shop raised.

And there was disappointment from some local residents that an alternative food store had not come forward for the site, with one person saying “no point in having another Co-op so close to an existing one”

However many welcomed the addition of a new shop at Shawfair adding that it would help with parking issues with one residents commenting “all positives from my point of view.”

The application is live on Midlothian Council’s planning portal for representations.