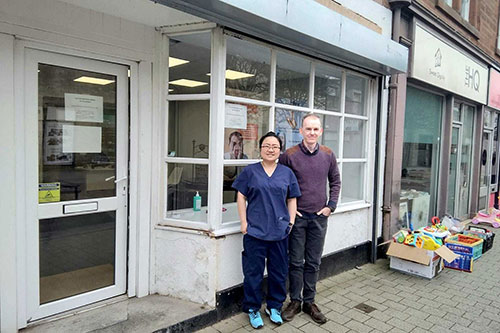 The owners of a community-backed clinic which faced closure after they were ordered to remove security shutters have won their appeal to keep them in place.

Husband and wife team Marc Stuart and Ying Peng opened the Penicuik Podiatrist Clinic in February this year on the town’s John Street.

But within a month they feared they might have to close after Midlothian planning officers said a security shutter installed at the new business needed planning approval and then refused to grant it.

Despite receiving 27 letters of support from people in the community as well as the backing of Penicuik Community Council, officers turned down their application saying it went against their policy to protect the “character of the conservation area”.

However a meeting of the council’s Local Review Body this week overturned the decision after being told that while the clinic was in a conservation area, businesses on the other side of the street were not – and an identical shutter was in place directly across from the clinic.

Councillor Colin Cassidy said he was ‘bamboozled’ by the rules.

He said: “They say you learn things every day and one of the strangest things I have learned is that one side of the street in Penicuik is a conservation area while the other, which faces onto it in a shopping precinct is not.

“The shops on one side are allowed to put shutters up while the others are not, it has just bamboozled me.”

Councillor Cassidy added he could not see a problem with the clinic having shutters, pointing out they would be down at night when it is dark.

Councillor David Virgo said the applicant seemed to have “fallen foul of a random thing”.

He said: “These shutters are going to be down at night where darkness impacts on the visual amenity. The police seem to support these rollers.

“It is about ensuring the continued safety of these shop fronts.”

The review body unanimously agreed to uphold the appeal and allow the shutters to remain.

Clinic manager Marc had said that without the shutters they would be forced to close as insurance providers required the additional security due to contents of the clinic.

He welcomed the decision which he said had restored his faith in local government.

And he revealed he and wife Ying were relieved not to have to leave the community which has given them so much support.

He said: “It means we do not have to close and relocate from the precinct shopping area.

“As a location it has so many advantages for us that we really were not wanting to have to move, and it is a huge relief for both me and my wife, the podiatrist in the business, Ying Peng.

“I say business deliberately as we are influencing the pedestrian area, simply in terms of the number of people coming into the precinct who have not had a reason to go there for years.

“I also run a mediumship business, Marc Stuart Medium, from the same location, and we now have another local business The Crystal Cave run by Susan Davidson relocating to be directly opposite us.

“Between the three businesses I can see us continuing to increase the number of people coming to the location.”

Marc added the decision would now allow the clinic to move forward with plans to expand by providing certainty to its future in the town.

He said: “Our decision also to expand into new products and services has been delayed and now that we know we do not have to move we will be becoming one of the only 20% of Podiatry businesses in Scotland using Digital Soles as a way of analysing people’s walking gates.

“I will be making the purchase order out to our suppliers today and committing us to a serious capital investment because of this news.”