Councillors concern after meeting papers appear at the last minute 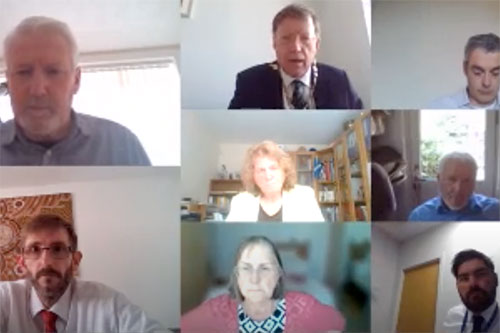 Due to Covid council meetings are conducted online. Photo June 2021

Officials were accused of holding councillors “to ransom” after a string of late reports were provided for a Midlothian council meeting.

Councillor Cath Johnstone raised concerns after elected members were confronted with a large volume of ‘last minute’ papers ahead of this week’s virtual full council meeting.

And she demanded late items were dropped from the agenda including a private report on proposals for a crematorium at Lasswade, which she said her SNP group had not heard a “squeak” about despite the report being dated back to November last year.

Councillor Johnstone said: “I feel it is unfair to ask us to make decisions on all these late papers.

“The volume of late papers was enormous and there was not time to get briefings from officers.

“I feel like we are being held to ransom, that put before us are papers we were not prepared for.”

Both papers were continued until November’s meeting following the protests.

Kevin Anderson, a Midlothian council executive director, apologised for the lateness of the reports.

Councillors heard a similar issue had occurred at the audit committee meeting a week earlier. At that meeting committee independent member Peter de Vink, accused council officials of being “disrespectful”.

Mr Anderson told the full council meeting on Tuesday: “It is not our intention.to disrespect members or the due governance here.

“Certainly we have had difficulty in getting a range of papers out and rather than drip feed papers as they became available this week I took the decision to supplement the entire pack.

“I apologise for the inconvenience and trouble that has caused but as I saw it, it was so we could provide the substantive papers to you in one pack.”

However Councillor Johnstone said an apology was not enough.

She told the meeting: “I don’t think an apology is sufficient in this case because the volume of paperwork is enormous.

“Just to read it all is a lengthy process and to digest it, understand it, anticipate unintended consequences etc and then not be able to ask officers to give us an independent briefing on the papers they have written is totally unacceptable.”

The papers, which were issued at the start of the week, according to the council’s own standing orders should be made available seven days ahead of a meeting Councillor Johnstone said.

However the council’s legal adviser said that deadline was an “aspirational one.”

He conceded: “Seven days is the aspiration and I think standing orders actually say if possible at least seven days but in any event at least five clear days before a meeting.”

Following a decision to put the papers back to council at its November meeting, a council spokesperson said: “A small number of papers have been delayed and were not available to be considered at the full council because they had to have updated information added.

“This could not be done within the required timescale and these will, therefore, be considered at the next full council meeting in six weeks’ time.”

The paper on a proposed crematorium at Lasswade was also carried forward after discussions behind closed doors.

The council spokesperson said: “The paper on the crematorium was not in public because it contained commercial and financial information relating to costings of an external contractor.

“The outcome was that council continued this matter on for further information and consideration.”