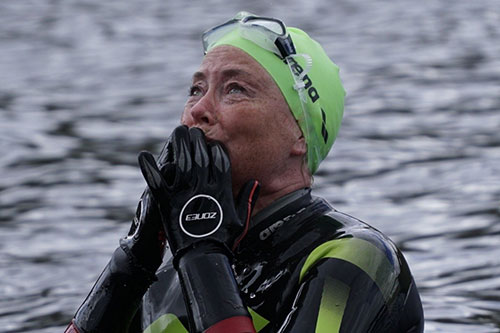 Donna Nelson after completing her brave swim in memory of her son, Chris Nelson.

The brave mother of Christopher Nelson, who sadly drowned in 2015, has tackled her fear of water by completing a swimming relay in the loch where her son’s ashes are scattered.

Christopher, 24, tragically died after falling into a canal in Amsterdam while on holiday in the city with his fiancé.

Now, his mother Donna, from Eskbank – who previously could not swim and who has had an immense fear of water since her son’s death – has swam a 27km relay with friends and family in St Mary’s Loch in his memory.

Donna’s swim was originally planned for May 2020 but had to be rescheduled due to Covid. To prepare for her challenge, she learned to swim by attending adult swimming lessons with instructor Jen Henderson at Lasswade Centre.

Donna said: “This challenge was the worst one mentally and emotionally for me that I have ever done by far, considering I couldn’t swim before and Christopher drowned in open water but I crossed that finish line for my boy!

“Before I started my lessons, I hadn’t been in a swimming pool since Christopher died. Even when I stood in the shower, I couldn’t put my face under the water. There hasn’t been a morning in the last six years where I’ve stood in the shower and not thought about what happened to my son.

“It was such an emotional swim but the support of my team, Steven Nelson the Water Safety Crew Manager and Niall Cassidy from Driftwood Adventures and his team were phenomenal. All of us felt so safe in their capable hands.

“We couldn’t believe how kind the weather was to us considering the week we’d had – I think my boy had a wee hand in that for his mum!”

Donna’s swim was a fundraiser for Edinburgh Children’s Hospital Charity (ECHC), which supports the Royal Hospital for Children and Young People – a charity close to the family’s heart.

She added: “Christopher was a mad sports person as a little boy, so we were on first name terms with the A&E staff at the Sick Kids as he had so many sports-related injuries.

“He was very athletic and used to really inspire me to do things I would never do. He was my inspiration for most things in life. He would never believe that I would take swimming lessons, and especially not that I would swim in open water.

“When I complete my challenges, I’m always sobbing my eyes out but also have such a sense of relief. Afterwards, I always look up to the sky and say ‘love you son’ and have a moment with him – this one was no different.

“I can’t thank everyone enough who has donated and supported us for this mammoth challenge for my boy.”

The grieving mum and her family and friends – also known as “Donna’s Prosecco Posse” or #teamnelson – have so far raised over £40,000 for ECHC by completing a series of fundraising challenges since 2015, including Tough Mudder and a 200-mile cycle. Her swim has so far raised over £9000.

Victoria Buchanan, Deputy Director of Fundraising and Marketing at ECHC, said: “Donna is hugely admirable, inspiring and brave and we would like to say an enormous congratulations to her and her friends and family for completing what we know was an incredibly tough challenge – both physically and mentally.

“We are so grateful to be Christopher’s family’s chosen charity. The money Team Nelson are raising will have a huge impact on the lives of children, young people and their families and make a phenomenal difference during their time in hospital. We cannot thank them enough for their incredible continued support.”

Donna and Christopher’s family and friends completed the 27km swim relay on Saturday 22nd May in St Mary’s Loch, supported by Steven Nelson (no relation) Founder and Manager/Activities Coordinator of Beyond Boundaries East Lothian and volunteers who very kindly agreed to be the Water Safety Crew, as well as Niall Cassidy and his team from Driftwood Adventures.