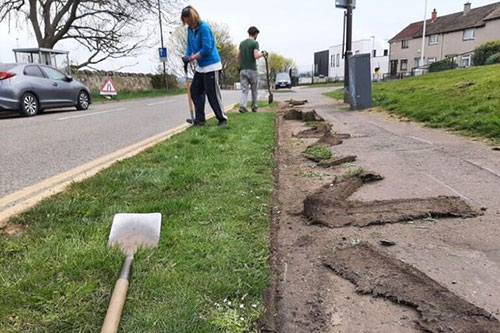 Residents concerned about the use of toxic weedkiller in their community have come together to adopt public land and stop council workers spraying it.

Danderhall and District Guerrilla Gardeners was set up after Midlothian Council reversed a decision to stop using controversial glyphosate weedkiller.

The group is now drawing up a map of green spaces it will take over maintenance of as it comes to an agreement with the local authority.

They said: “We don’t want this toxic weedkiller sprayed in our community and are working with the local authority to ensure it is not used here.

“The support from the whole community has been overwhelming, with more people getting involved as word of mouth spreads.”

And the Danderhall group has become the first to take up the proposal, holding talks with the local authority and working to meet the requirements to adopt the land.

It is currently drawing up a map of areas which it will adopt, which will be presented to the council, and residents are being urged to get in touch if they have areas they want to maintain themselves.

The group said: “We have identified paths and public areas which we are going out in teams to clear up and maintain but people may have small areas outside their own homes that they want to take on themselves and they can let us know if they want them added to the map.

“The council has agreed that the areas identified they will continue to cut the grass but will not spray weedkiller.”

The group has been out carrying out weeding and clearing work on recent weeks and will be at Smithy Green Avenue this Sunday from 11am to 1pm if anyone wants to get involved or find out more.

A spokesman for Midlothian Council confirmed that the council was soon to finalise an agreement with Danderhall and District Guerrilla Gardeners, the first community group to adopt localised green spaces.

The spokesman added: “We’re ironing out various details, such as making sure we have a clear idea of exactly what services the guerrilla gardeners will offer and where, and our responsibilities in return.

“We are really pleased to be working with the community group and we’re looking forward to welcoming further similar requests in the near future.

“We’ll be putting details of how to apply on the council’s website at www.midlothian.gov.uk but, in the meantime, any groups interested can contact us by emailing LandscapeAndCountrysideEnquries@midlothian.gov.uk”

The offer to let people adopt green spaces is for any community group interested in maintaining land themselves for any reason.