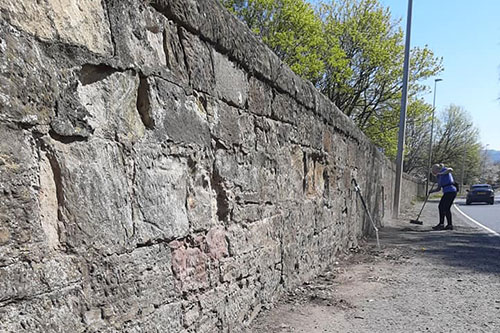 Contractors sprayed weedkiller around a primary school, despite a council pledge to make it a no-go area amid concern over the use of glyphosate in the community.

Danderhall and District Guerilla Gardeners became the first community group to enter talks with Midlothian Council to adopt its green spaces rather than allow the use of the toxic weedkiller on their streets.

However, despite a pledge by the council not to spray in areas the group identified for adopting, members were horrified to see workers out tackling weeds around their new Danderhall Primary School last week.

The local authority said that the work had been authorised by the primary school’s contractors Heron, who were unaware of the agreement.

A council spokesperson said: “The main contractor of the new school and hub at Danderhall subcontracted work to finish the soft landscaping.

“The subcontractor used weed killer, unaware of the council decision not to do so in this area.

“The council has since intervened and the subcontractor has stopped the spraying and is in the process of removing the treated weeds.”

And the Danderhall group became the first to take up the proposal, holding talks with the local authority and working to meet the requirements to adopt the land.

However, it was understood that while the map was being drawn up, no glyphosate would be used in the area.

They were stunned by the arrival of sprayers at the school last week.

A spokesperson for the group said that the weedkiller had been sprayed along the boundary fences of the school where young children played and calls were made to the council as soon as they became aware to halt the work.

One volunteer said: “The primary one and nursery children were playing around the fencing where the weedkiller was being sprayed.

“They’ve been told to go out and lift all the affected weeds.”

The group has been organising volunteer groups to go out on Sundays to weed areas of the community manually as they take over management of the streets, and others have been out daily carrying out the work.

Details of how to get involved and upcoming events can be found on their Facebook page.