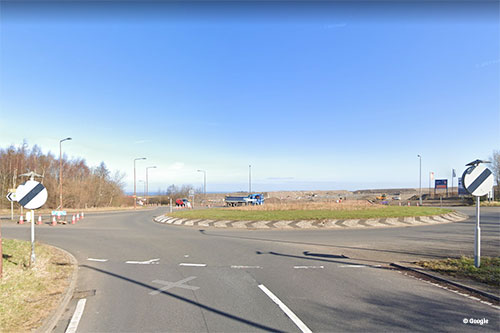 Nearly 200 new homes at the new town of Blindwells have been approved despite a bid by developers to delay improving access off the A1 for a second time.

Incidents of road rage at the Bankton Roundabout leading to the new settlement have been going on for years, according to one local councillor.

In January lead developers behind the Blindwells settlement, Hargreaves Services Ltd, were allowed to change planning conditions demanding traffic lights and upgrading work at the roundabout are carried out before anyone moved onto the site.

East Lothian Council agreed to extend the deadline for the work until the 236th home was occupied.

But at a meeting this week planners told councillors that the developers were now asking for a further delay to allow 900 homes to be occupied before the work is complete.

And a spokesperson for Hargreaves said delays over the work were being caused because of uncertainty over the council’s plans for the nearby former Cockenzie Power Station site, which is local authority owned.

Iain Slater told a virtual meeting of the planning committee: “We do not want to end up putting in traffic lights only for the council to come along in 18 months and rip them up and start again.

“That is the reason we went back to Transport Scotland to see if we can align the work.”

The committee was told neither Transport Scotland or council planners were in favour of delaying the work for so long.

However planning convenor Norman Hampshire acknowledged that the current Bankton interchange could not cope with the additional pressures coming.

And he hinted it may be time for a new junction to be built on the A1.

Councillor Hampshire said: “We need to have discussions with Transport Scotland about how this junction and potential new junctions coming off the A1 in East Lothian (will work) because we cannot put everything on one junction.”

Earlier Councillor Kenny McLeod told the committee people were already struggling to use the Bankton roundabout which has two lanes coming off the A1.

He said: “Members of the public can’t be in the right lane as it is now. The road rage we have seen on that road for years has been phenomenal.

“I have had a lot of complaints about it and I expect to get a lot more in the future.”

His comments were backed by fellow councillor Jim Goodfellow.

The latest housing planning application was for phase three of the Blindwells development and included 185 houses and 12 flats.

Planning officers described the site of the new housing as at the southwest of the wider Blindwells site which sits between the established towns of Prestonpans and Tranent.

Blindwells is expected to have 1,600 homes in total with further land expected to be expanded into in the future.

The committee approved the application and it was agreed talks would be held between the council, Transport Scotland and Hargreaves to try and find solutions to the access issues.