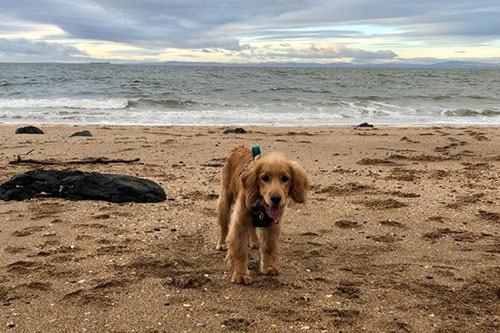 Dog-free zones to protect wildlife could be introduced in East Lothian’s countryside under new rules to protect the county’s coastal landscape.

East Lothian Council currently only has one dog-free zone at Aberlady Nature Reserve in place.

However, a virtual meeting of the council’s cabinet has approved new Land Management Rules (LMR) which will increase the powers of countryside rangers to enforce more bans.

The move comes after public consultation over the LMR saw more than 77 per cent of those taking part in favour of dog-free zones.

At a meeting of the minority Labour administration cabinet this week, councillors were told that the introduction of temporary, seasonal or permanent zones would be used in areas where wildlife was at risk or nesting areas had been identified.

It comes after a number of incidents at beauty spots such as Musselburgh Lagoons, where concerns about off-lead dogs disturbing nesting birds have been raised.

No list of potential dog-free zones has been drawn up but consideration could be given to introducing the new measures in certain locations if issues arise.

Campaigners have been calling for a section of North Berwick’s East and West beaches to be made a no-go area for dogs.

However, councillors were told that there were no plans to introduce zones on the beaches themselves.

Other rules approved by cabinet include a ban on people using countryside sites disrupting the enjoyment of others by using speakers or drones which disturb other people, as well as no camping outside designated sites unless it is wild camping.

Anyone who appears to be breaking, or has broken, LMRs can be asked to leave the area, with persistent offenders facing bans from the area or county.

East Lothian Provost John McMillan said: “This is about visiting East Lothian and being responsible, balancing your rights with the commensurate responsibility and I would urge everyone to do that.”

The new rules come after concerns from local communities about balancing the welcome influx of tourist and its impact on the environment.

“We have over 40 miles of coastline and most of it is designated as protected areas.

“At the same time, we do have a responsibility to allow safe access to visitors and the community, and that is where the conflict is.

“Although the vast majority of people respect and enjoy the local environment safely and responsibly, there were some challenges which caused concern to communities.

“The new LMRs agreed by cabinet will help our teams, including countryside rangers, address these challenges for the benefit of everyone who enjoys and appreciates picturesque East Lothian.”