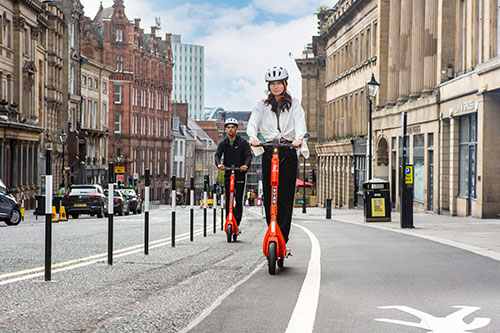 Photo Credit: The Royal Society for the Prevention of Accidents (RoSPA)

The use of electric scooters on Edinburgh’s streets has been labelled a “Wild West situation” where children as young as 10 drive on pavements and endanger pedestrians, as a councillor called for the city to prepare for them to be regulated.

Despite the law stating e-scooters can only be driven on private land they are regularly sighted on the streets of the capital with people often using them along cycle routes.

Legal to buy and sell with no age limit in place, Edinburgh SNP councillor Danny Aston said there is a ‘regulatory gap’ that could soon be filled.

“Westminster seems to be heading towards a situation where they will be legalised and I don’t want Edinburgh to be caught with our pants down,” he said.

“Have we thought about the potential conflicts with cyclists in particular, but also other road users?”

Councillor Aston said electric scooters, which typically have a top speed of 25 kph and can be bought from mainstream retailers for as little as £300, are already posing risks to pedestrians.

He said: “I’ve got a lot of concerns. It’s essentially like a Wild West situation that we’ve got because there isn’t any legislation around them.”

Cllr Aston, who represents Craigentinny/Duddingston on Edinburgh Council, reported seeing “kids as young as 10” on e-scooters and described the scenes as “antisocial and dangerous”.

He said: “I was walking back from doing my surgery last night in Piershill and I got overtaken on the pavement very closely by electric scooters – and because they’re electric you don’t hear them, they were probably travelling at least 20 miles an hour.”

He added the city’s most vulnerable individuals such as pensioners, people with disabilities, those with visual impairments and parents with push chairs are most likely to come to harm.

“If someone gets an electric scooter, what are they going to do? Especially if they’re a child they’re going to take it out on the street and muck about on it,” Mr Aston continued.

“We’re in this situation because there’s no framework around how these things can be used.

“If they were regulated it might be a minimum age of 16 to use them, or whatever, and there might be more controls around maximum speeds on them as there are for e-bikes. But they don’t apply.”

Recent moves by the UK Government suggest regulation could be on the way. In a 2020 report on e-scooters, the House of Commons Transport Select Committee backed their legalisation, whilst rental schemes are already being piloted in 31 regions in England.

“Things are moving along at a pace by the looks of it,” Cllr Aston said, “but I’m certainly not advocating that Edinburgh should be part of one of these trials because I’m very sceptical.”

“From the data that I’ve looked at it looks like electric scooters are not so much reducing private car journeys as possibly reducing use of public transport and possibly even reducing walking and cycling.”

Nonetheless, he is urging council bosses to prepare the the legalisation of e-scooters and in a bid to see action taken will table a motion at Edinburgh’s transport committee on Thursday requesting a report detailing any engagement between city officials and the UK Government to date.

In April a study into the safety of electric scooters by The Royal Society for the Prevention of Accidents (RoSPA) found that e-scooters are significantly less risky than many other forms of transport on Britain’s roads. The report recorded an incident rate of 0.66 collisions for every million miles travelled on an e-scooter – five times lower than bicycles with 3.33 collisions per million miles travelled and nine times lower than the figure of 5.88 for motorcycles. Read more HERE.