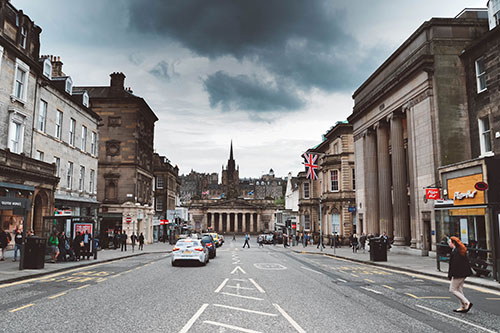 Hanover Street in the centre of the proposed Edinburgh LEZ. Photo by Dive. In Life

Edinburgh City Council has taken the next steps towards banning olders, polluting vehicles from the city centre – but has delayed making a decision on the controversial Spaces for People measures until next week.

During a marathon transport committee meeting on Thursday June 17, councillors agreed to consult the city’s residents on introducing a ‘low emission zone’ (LEZ), which would effectively ban older vehicles from the city centre.

However, each time a motorist ignores the ban, the fine will double, to a maximum of £420 for private vehicles and £900 for HGVs. Mopeds and motorcycles will be exempt.

The council estimates 16,000 vehicles in the city will be affected by the ban, mostly diesels.

Now, councillors have voted to undertake a 12-week public consultation, which will inform a report back to committee in autumn before the statutory process to introduce the LEZ begins, with the aim of implementing the scheme in spring 2022.

During the seven-hour meeting, councillors also discussed the next steps for the council’s controversial ‘Spaces for People’ scheme.

Over the first three hours of the meeting, the transport committee heard deputations from 14 different community and activist groups, which each wanted to speak about individual junctions and specific schemes they either supported or objected to.

The ruling SNP/Labour administration wants to keep the majority of Spaces for People schemes in place for another 18 months, albeit without the temporary measures around shopping districts and on Lanark Road, which are due to be scrapped.

The schemes they want to take forward will be retained using Experimental Traffic Regulation Orders (ETROs), which would give the council another 18 months to assess the effect of each scheme.

Much like the Temporary Traffic Regulation Orders (TTROs) – which were used to install the Spaces for People schemes in the first place – ETROs require no prior consultation with residents.

This will effectively mean capital residents will have had no opportunity to formally object to Spaces for People measures for up to three years – although the council has undertaken a city-wide consultation, which attracted more than 17,600 responses, and conducted market research with 583 residents.

A Conservative Party amendment to the SNP/Labour administration’s motion asks the council to focus more on the consultation, which attracted a much larger set of consultees, the majority of which opposed Spaces for People.

It is understood council officers do not agree with this approach as they say traffic and commuter levels have not returned to pre-pandemic levels, and so the council needs more time to learn from the temporary schemes.

The Green Party, on other hand, is opposed to the administration’s decision to reopen Lanark Road, and to remove vehicle restrictions in shopping districts.

However, councillors have decided to defer making a decision on the future of Spaces for People until Thursday 24 June, when a full meeting of Edinburgh City Council will be held.