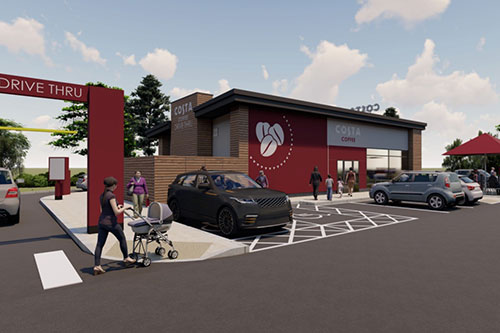 Plans to build a drive-through coffee shop in a supermarket car park have been rejected amid concerns about its impact on neighbourhood traffic and the environment.

Councillors said proposals for a new Costa with a ‘drive-thru facility’ in the parking area of Ferry Road’s Morrisons would cause more congestion at an already busy junction by the store.

It was also argued the development would encourage people to take more short car journeys – something the council’s climate policies are looking to cut as they try to reduce emissions across the city.

The application, which officials had recommended be granted permission, drew 58 objections and just one letter of support.

Councillor George Gordon, who represents the Forth ward where the proposed development would have been built, said he received “a heck of a lot of emails” from local residents objecting to the drive-through Costa.

He said: “I’m totally unsupportive of this. This is probably the most problematic junction in my ward, it’s been so for a number of years. The pollution down there is very heavy, I don’t accept there’s going to be a number of small journeys because it will just encourage people to come off the junctions.”

“People who know this area will know that that’s a particularly bad junction already and that an increase of car traffic going through that junction may be a significant problem.

“Most people will not object to a coffee shop, what people are really concerned about is the drive-through element.”

Responding to congestion concerns, planning officer Matthew Simpson described the potential impact on Ferry Road’s traffic as “very very small”, adding it would not hit a five per cent increase.

Lib Dem councillor Hal Osler asked planners if members could agree to grant permission for the coffee shop but not the drive-through element of the plans, saying: “No one has an objection to the coffee shop itself.”

But planning officer Paul Devaney said this would not be possible given the description of the development.

Committee convenor Neil Gardiner said: “The transport policies of the council are trying to encourage a reduction in short journeys by car and I can’t see how a facility like this would meet that requirement.

“Having been in that supermarket there’s a cafe in there and disabled parking spaces next to it. Obviously some people can’t get out of cars in certain circumstances but there is a cafe available on that site already and there is disabled parking.”

“We are in the middle of a climate change emergency and this doesn’t seem to be the right way forward as nobody’s spoken in favour of it and I think we have the tools to reject it.”

Labour councillor Maureen Child said she would vote in favour of granting permission as the council “doesn’t have policies that would sustain a refusal through the appeals process”.

A motion to give the proposals the green light was defeated by seven votes to three.