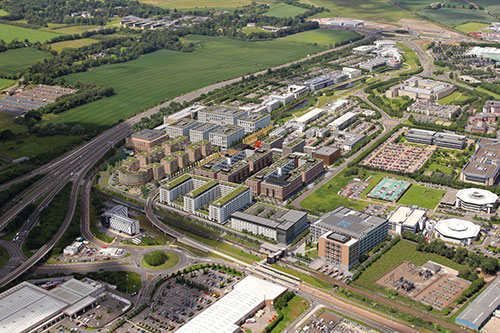 An impression of what Edinburgh Park would look like courtesy of www.parabola.com/places/edinburgh-park

Work on a huge 1700 home development ‘designed around the happiness and success of its people’ has been delayed amid a struggling over £1.9m of developer contributions.

However, the planning permission was granted on the condition a legal agreement between the two parties – concerning affordable housing, education and healthcare contributions – be reached within six months.

Edinburgh City Council chiefs initially asked for £1,923,075 in developer contributions, for infrastructure, education and affordable housing, but the two parties have not yet reached an agreement.

Despite also being granted a three-month deadline extension, the council and the developers still failed to reach an agreement, and now councillors are being asked to once again extend the deadline.

The scale of the new development is enormous – once completed it will boast over 1700 homes, 43,000m2 of office space, a mixed use commercial hub and public square at Edinburgh Park Station, including a 170 room apartment hotel.

A report, sent to councillors ahead of the development management committee, set to meet on Wednesday September 8, says the council is close to an agreement – but does not say how much the council is set to receive in developer contributions.

The report reads: “Significant progress has been made in the conclusion of the required legal agreement.

“There are only minor matters left to be agreed and it is anticipated that the agreement will be concluded and signed by the end of September 2021.

“Committee is asked to agree an extension of the conclusion of the legal agreement for a further three months to allow the planning permission to be issued.”

A planning statement, accompanying Parabola’s application in May 2020, outlines the company’s vision for the area.

The planning report reads: “The Parabola vision is for a new quarter, a great place to live and work, and a cultural destination for Edinburgh.

“Their aim is to provide a land use mix that integrates commercial office development, residential, leisure, food and drink, cultural activities and secure car parking.

“A modern streetscape will be provided to encourage sustainable travel, social life and recreation.

“Electric vehicle facilities are to be provided across the site, whilst office car parking will be relegated to the fringe of the site.

“A travel plan will help encourage sustainable travel and allow the site to be an exemplar development that does not rely on the private car.

“Edinburgh Park has offered the team an ideal chance to examine what makes a successful contemporary urban environment and an opportunity to create a new vibrant place for Edinburgh.

“The ambition is to avoid the typical suburban sprawl and, given the outstanding transport links, to create a new city quarter to match the scale and grandeur of historic Edinburgh.”