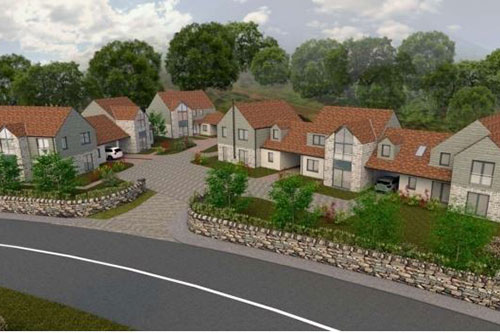 Artist's impression of new housing for Eskbank on Melville Road.

A former rail yard used in the construction of the Borders Railway could be turned into housing under plans first put forward 13 years ago.

Caledonian Trust has applied for planning permission for six houses on the brownfield site off Melville Road in Eskbank.

The land was at the centre of housing plans in 2008 but was seconded by Network Rail who issued a Notice of Occupation to use the site for the railway construction.

It was used as a storage yard while the new line was built before being handed back to its owners.

In a statement to Midlothian Council, the Trust said that in 2017 the plans were submitted to planners however they were withdrawn after the local authority asked for a report into the noise impact of the rail line, and criticised the layout as “too suburban”.

A noise and vibration report from Edinburgh firm RMP forms part of the planning application and states that the closest house to the rail line will be just 10 metres away which is where measurements were taken.

The report found noise during the day would be above local authority guidelines for housing and recommends a 3 metre high acoustic barrier such as a timber fence for properties closest to the track and upgraded glazing for upstairs bedrooms.

Caledonian Trust has included the acoustic fencing in its planning application and acknowledged that the houses would be the first thing people entering Eskbank from the south see.

In its application to the local authority the trust said the disused storage shed currently on the site would be demolished and a stone wall at the front rebuilt as part of the development with semi-mature trees planted to maintain an already established ‘green’ gateway into the community.

It said: “It is recognised that this site is visually prominent and this will be the first building group visible when entering Eskbank from the south.

“Numerous trees are located on the land surrounding the site which combine to provide a visually attractive ‘green’ entrance into Eskbank.

“These new trees, coupled with new hedging, will ensure that the development is partially screened while being integrated into the landscape, resulting in an attractive ‘green’ appearance to the entrance into Eskbank.”

Road safety is likely to be an issue as the houses’ access to Melville Road is on an ‘S’ bend where there have been numerous accidents over the years.

The plans are can be viewed online at the council’s planning portal.