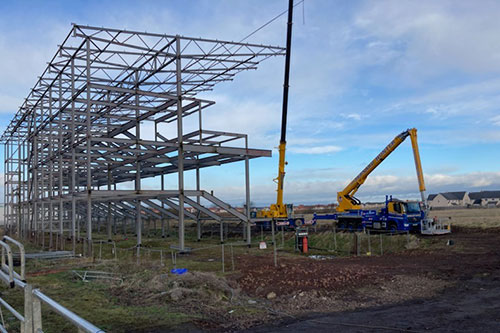 Work to dismantle greyhound stadium stand at Wallyford is finally getting underway over 15 years after it was built.

A giant spectator stand which has has stood on the top of a hill for more than 15 years as a stark landmark in the East Lothian landscape is finally coming down.

The steel structure was put up by Sirius Sport and Leisure after East Lothian Council demanded work began on a planned greyhound stadium at the Wallyford site before housing needed to fund the project was built.

However the stadium was never built and as the costs rose and support for dog racing waned the firm’s owner admitted it was no longer a viable project.

Thousands of anti-racing supporters signed a petition demanding the proposed stadium was scrapped and the removal of the stand is a final victory in their campaign.

Cranes moved onto the site this week to begin dismantling the stand, with work delayed by high winds.

And local residents whose homes look out onto it admit they are relieved to see it go .

One said: “It is an eyesore and sticks out like a sore thumb but it has also become a bit of a landmark.

“You always knew you were nearly home when you saw it from the A1 after a long journey.”

Sirius Sport and Leisure successfully applied to build housing on adjoining land at Barbachlaw Farm over the years arguing it was the only way to fund the stadium project.

However the housing was tied into an agreement with East Lothian Council that the racing venue would be built.

The stand has stood alone on the site since the early Noughties and last year the council agreed to drop the condition after the firm’s director Howard Wallace, said changing attitudes towards greyhound racing in society and among politicians along with the closure of a number of UK stadiums had made the project obsolete.

He said: “I regret that, against this evolving background, I have not been able to proceed with the stadium any further.

“My company Sirius Sports & Leisure has written off stadium costs of £2.53million in its accounts.”

Local firm John Gilmour Butchers has applied for planning permission to move its Macmerry operations to the site so it can expand.

The firm want to create a new butchery, a processing facility for a new range of plant-based foods, a deli, food hall and create 40 new jobs.

Plans for a greyhound stadium at Wallyford were first put forward in 2001 and finally approved four years later as part of a mixed use development including business and housing.

Campaigners have lobbied for years against the stadium and welcomed news it was no longer going ahead.

News that the council had agreed to remove the stadium from a condition for the site was welcomed on social media with one Twitter user tweeting “It’s over!”