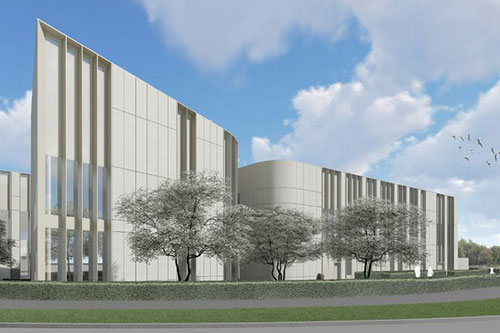 Artist's impression of the new £7.5million centre at Shawfair.

A state-of-the art women’s health centre which aims to tackle Scotland’s low birth rates has taken a step closer as detailed plans have been revealed.

The centre, along with a state of the art dental practice, will make up a £7.5million facility next to Spires Hospital on the Shawfair site.

Artists impressions of the new centres, which will create 53 jobs, have been produced as the company applies for detailed planning permission for the project from Midlothian Council.

As well as providing health services for women of all ages, the centre aims to lead the way in offering the latest cutting edge fertility treatments.

Genus says the fertility rate in Scotland has been declining since the early 2000s and remains the lowest in the UK.

In a report to planners the company says: “The birth rate in Edinburgh has been consistently the lowest throughout Scotland.

“Nationally, around 1 in 7 couples have difficulties in conceiving which equates to 3.5 million people in the UK and 25 million across Europe.”

The company says demand of assisted conception continues to grow in the UK and in Scotland there are currently eight IVF clinics, only one of which is private.

It says: “The proposed Genus clinic will be the first standalone centre of excellence for women’s health and fertility in Scotland.

“The clinic will offer state-of-the-art care and innovative equipment.”

Alongside the health centre will be the new Centre of Sustainable Dentistry in Edinburgh, bringing the latest dental practices to its clients with state of the art digital equipment along with traditional services.

Images of the new building show two wings, one for each centre with a central glass atrium and lobby which will take up 2,600 square metres of space. The architecture is described as “unashamedly modern”.