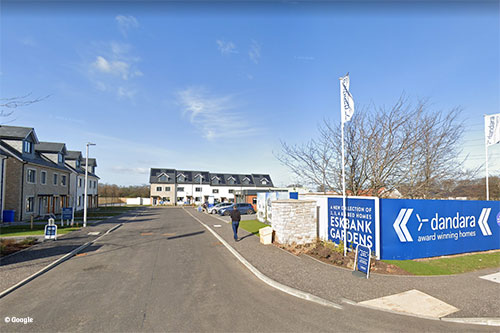 Concern that four extra houses on a new estate would lead to ‘destructive’ dogs and walkers in neighbouring woods failed to stop developers being given the go ahead to add more homes to their site.

Dandara East Scotland applied for a change to conditions to allow them to add the extra ‘new Scottish House type” homes to their site at Eskbank North, Dalkeith.

However the move to introduce the additional homes, which vary between two-and-a-half and three storeys high, sparked a backlash from community councils and local residents.

Dandara insisted the new design of the homes, which comes in the post Covid era, sought to offer homeworking space in their dual aspect approach.

It asked planners to amend approved plans for 84 houses at the site to allow to 88 homes instead.

Midlothian Council received 12 objections and both Bilston and Roslin and Eskbank and Newbattle Community Councils lodged objections on the ground that the new, larger homes would be an ‘over development’ of the site.

Brian Wailes, chairman of Eskbank and Newbattle Community Council raised additional concerns about the woods to the north of the development and impact on the River North Esk and Valley.

He said: “We would like to e sure the narrow wood with pathway will protect the river valley from views of these too high houses but are not confident.

“The wood is important as a wildlife corridor but we are concerned the extra burden of dogs, their walkers and more people will be very destructive.”

However approving the change of conditions to allow the additional houses, planners ruled that since the principle of building houses at the site had been established with the approval of the 84 homes, the changes were allowed.

And they ruled conditions imposed on the original planning permission to protect wildlife on the site continued adding “the proposed development does not diminish these ecological requirements which are still required to be undertaken”.