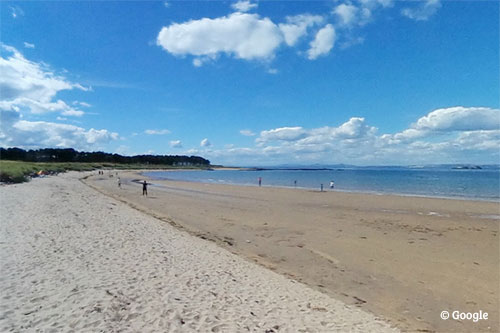 Yellowcraig beach in East Lothian where the four year old was injured.

A four year old boy was left with severe burns to his hands as he played in sand which had been used to cover burning embers of a beach fire.

The youngster was on a family picnic at Yellowcraig beach when the incident happened on Sunday.

The family, from Midlothian, were unaware that the spot they chose on the beach had been vacated by people who had lit a fire and then doused it in sand to put it out.

East Lothian Council’s countryside rangers have urged people who want to light fires at beaches to make sure all traces are removed or bring a stove to contain the flames.

“Remove all traces of an open fire before you leave.”

The local authority and its rangers service has been carrying out patrols alongside the Scottish Fire and Rescue Service across the county’s coastal area in the warmer weather.

Rangers are equipped with water carriers to use to douse smouldering fires, following a string of incidents last summer and earlier this year when fires broke out in wooded areas or dunes, and new signs advising people on how to behave at popular beauty spots have been put up.

The incident involving the young boy was reported at a meeting of East Lothian Council this week as concerns were raised about the increase of tourists onto the county’s coastal areas and accompanying incidents.

However, issues were caused by illegal fires in some wooded areas at beauty spots such as Tyninghame.

In April this year, a fire at Tyninghame Links ran out of control and firefighters were called to the scene to try and put it out.

At this week’s meeting, concerns were raised with East Lothian fire chief Steve Gourlay about action in place to ensure visitors acted responsibly.

Tom Reid, the council’s head of infrastructure, told councillors that there was a multi-agency board meeting weekly, which included emergency services, to look at concerns around the events and safety in the county.

And he said work was ongoing by the council to get safety messages to people using the countryside and coastal areas.

He said: “We have had some concerning water incidents with lilos, access to areas which are taboo on the coast and fire incidents; we had an unfortunate incident this week with a young person receiving injuries to the hand.”

Following the meeting, Mr Reid said: “We were concerned to hear that a family’s day out at the beach on Sunday was ruined by the irresponsible actions of others who had covered over the remains of an open fire with sand which continued to build up considerable heat, resulting in burns to the hands of a young boy playing in the sand.

“As restrictions have eased in recent months, we have seen a considerable increase in visitors to our beaches and other countryside sites and have shared advice from the Scottish Outdoor Access Code about responsible behaviour.

“Ideally, people should consider the use of cooking stoves rather than open fires but always ensure that any fire is extinguished when they leave and to ‘leave no trace of their visit’.”

Paul McLennan, East Lothian MSP, said the incident should serve as a warning to people who set fires irresponsibly.

He said: “I hope the boy recovers quickly and I wish him all the best.

“Everyone should be confident that they are safe visiting our coastal areas and I am extremely disappointed that that hasn’t happened been the case for this family.

“This event should be a warning to those who set fires irresponsibly without the experience and knowledge of how to mitigate the dangers that come with lighting fires in an uncontrolled outdoor area.

“Our coastal environment is world-class – people want to visit and enjoy the nature that is on our doorstep and I strongly encourage that.

“But selfish, dangerous actions like this ruin that opportunity for others.”

East Lothian MP Kenny MacAskill described the incident involving the youngster as “tragic”, adding that he hoped the boy fully recovered from his injuries.

He said: “It shows the dangers that exist and can be left even when efforts are made. It’s why only designated and designed places should be used. Following the rangers’ advice is essential and more resources must be given to them.”