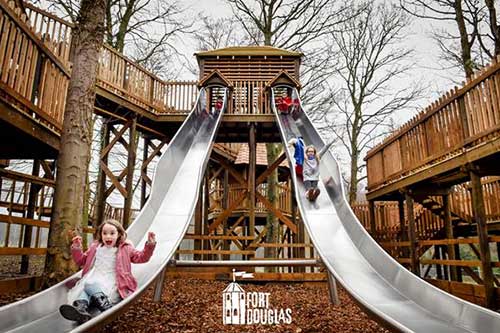 Plans to introduce two giant jumping pillows in a country park’s adventure playground have been given the go-ahead.

Dalkeith Country Park applied for planning permission to install the inflatable pillows in its Fort Douglas play area for youngsters to enjoy.

In the application on behalf of the Buccleuch Estate, it was revealed that one of the pillows would require the felling of four trees in the park.

However, Midlothian Council’s planners have approved the plans on the condition a replacement planting programme is agreed with the local authority.

In a report to council, planning officers said: “The existing woodland character of the area makes an important contribution to the character and setting of the listed buildings, the conservation area, the designed landscape and the special landscape area.

“The Fort Douglas development has successfully incorporated large numbers of existing trees within the play structures.

“The area proposed for the larger jumping pillow is situated between two lines of conifers and the proposed development will require the felling of four trees.

“Whilst the impact of the felling on the landscape character of the park will be minimal, it would still be reasonable to condition replacement planting to compensate for the loss of the trees.”

Described as a cross between a trampoline and a bouncy castle, Jumping Pillows originated in Denmark in the 1980s and have become a popular addition to family playparks and venues across Europe.

Fort Douglas adventure park is a popular attraction for families, with zipwires, climbing walls, mazes and tunnels to explore.

It reopened to the public last month after closing during lockdown and currently follows Covid safety guidelines. Full details of its current operating procedures can be found at www.dalkeithcountrypark.co.uk/outdoor-activities/fort-douglas/