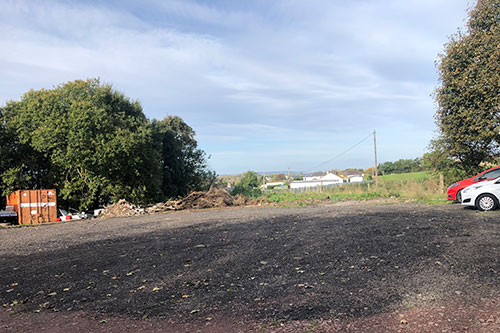 The operator of a builders yard which employs up to 17 people has lost his appeal against an order forcing him to shut it down.

Peter Joyce and Son bought land at Ashbank, outside Gorebridge, last year to expand the business but was refused planning permission by Midlothian Council to change the use of the site from vacant land to a yard and served with an enforcement notice.

Local residents complained rats from the site had been driven onto their land by work on it and alleged council workers were moonlighting on the site, as well as accusing the operator of damaging phone lines and fencing.

Operator Rory Joyce denied all the allegations and accused council planners of putting “lies above jobs”.

He took his case to Scottish Ministers insisting the site was a “scrapyard” when it was bought and already in use as an industrial site.

However the Scottish Government Reporter has now dismissed his appeal insisting the enforcement notice stands and the business must shut.

In his findings the Reporter said: “I acknowledge the appellant’s wish to provide a site for his business, which provides local employment. I also saw at my site visit a number of commercial activities in the vicinity.

“I have considered all of the other matters raised, but there are none which would lead me to alter my conclusion that the enforcement notice should be upheld.”

In his appeal Mr Joyce said the firm had used the land to store materials and provide off street parking for a number of years before buying it from its previous owner.

He said: “We walked past this site daily with our family dog for 13 years and this site has always been industrial.

“This purchase then provided us with additional storage and off street parking for our many commercial vehicles and open yard space to accommodate our growing family business where we currently employ seventeen local residents including five apprentices at various stages of there careers.”

He told the Reporter that he believed the council’s decision to refuse planning permission was ‘unfair’.

However the Reporter said he was only able to make a ruling on the enforcement notice the council issued after refusing planning permission.

And he said Mr Joyce had confirmed in his own testimony that the business was operating without planning approval.

He said: “The appellant’s submissions confirm the use of the land for his business, the siting of shipping containers and the laying of hardstanding.

”On the basis of what I have read and seen I conclude the matters stated in the notice have occurred. The appeal therefore fails.”