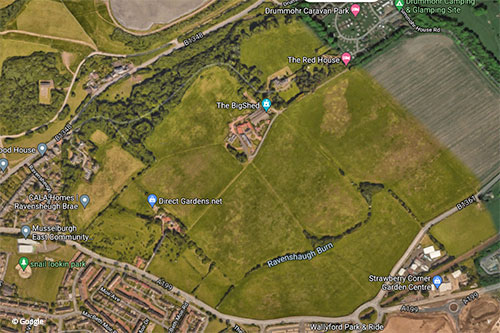 The site of Goshen Farm on the eastern edge of Musselburgh.

Controversial plans to build housing between two communities have been thrown out after it was ruled they would lead to “significant erosion of the green belt”.

Developers Barratt David Wilson asked Scottish Ministers to rule on their plans for 300 houses at Goshen Farm, on the eastern edge of Musselburgh.

They brought their appeal after East Lothian Council’s planners failed to make a decision on the proposals, which were lodged in 2018.

However, Musselburgh and Inveresk Community Council, and neighbouring Prestonpans Community Council, both objected to the housing, pointing to traffic problems surrounding the towns, the need to protect the green belt and a lack of GP services.

Appealing to the reporter, Irene Tait, Musselburgh and Inveresk Community Council chairperson, said: “Our health service is at breaking point and this started long before Covid-19.

“One of our GP surgeries has over 20,000 patients registered and they struggle to answer the phone, with the result some patients give up and go straight to A&E in Edinburgh.”

Mrs Tait also pointed to the pressures on rail services in the town, where the rush-hour ScotRail services have earned the nickname the ‘Sardine Express’ due to overcrowding in recent years.

She added: “Houses are sold on the good infrastructure we have in Musselburgh; the reality is you are very lucky if you get standing room
on the train in the morning and evening at rush hour, with lots of people left waiting for next arrivals.”

He pointed out that Goshen Farm as a housing site was removed from East Lothian Council’s Local Development Plan after public consultation saw people come out against its inclusion.

Concern about losing the green belt land which lies between the two towns was raised by both community councils.

And the reporter this week agreed, ruling: “The current proposal would represent a significant erosion of the green belt at this location and a significant encroachment of urban development into the remaining countryside to the east of Musselburgh.”

Developers had argued that there was a housing land supply shortfall in East Lothian and the development should be allowed; however, the reporter disagreed.

The developers are currently challenging changes to policies which set out the methods used to calculate housing shortfall in a judicial review.

However, the reporter said that, even if the legal challenge was won, he did not believe there would be enough benefit from allowing the housing to outweigh the impact on the local communities.

East Lothian Council’s party leaders lodged a letter with the reporter alongside community objections, in which they urged him to refuse planning permission for Goshen.

Councillor Stuart Currie, SNP Group leader and ward member, said: “This is a very welcome decision by the reporter to dismiss the appeal and refuse planning consent for houses to be built on Goshen Farm.

“I am yet to find a single constituent who thought it was a good idea and, as a local councillor, I am so pleased for the community and all the campaigners who stepped up to say no, a view shared by the reporter today.

“This must be the end of the matter and I hope it sends a clear signal that communities value our green space.”