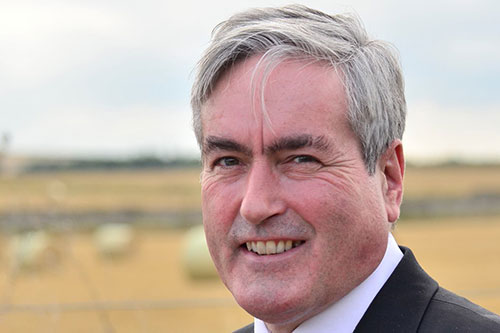 Retired East Lothian MSP Iain Gray has revealed his biggest regret is not being able to become Scotland’s First Minister.

Mr Gray, who stepped down in May after 14 years representing the county, says being able to stand up for East Lothian in the Scottish Parliament has been one of the proudest achievements of his life.

However, reflecting on his time, he added: “I regret that it has been in opposition. I did not get the chance to be First Minister.

“I think East Lothian would have welcomed having their First Minister come from here.”

Mr Gray, who was a minister in the first Scottish Government after he was elected to the Edinburgh Pentlands seat, stood to become East Lothian’s MSP in 2007, winning his seat and retaining it until his retirement, which was announced ahead of last month’s Holyrood elections.

Following in the footsteps of giants, he said standing in the Scottish Parliament as East Lothian’s MSP gave him a sense of pride and history.

He said: “It is special to represent East Lothian, it is such a great place with great communities and people.

“It had a tradition of supporting devolution going back to John P Mackintosh and John Home Robertson. There is a tradition here of great parliamentarians and it is a great privilege to be chosen to represent East Lothian.”

Between 2008 and 2011, Mr Gray took over as Scottish Labour leader in Holyrood. It was a role he admits was tough but does not regret.

The Scottish Labour Party suffered a devastating loss at the 2011 Holyrood election as the SNP became the first Scottish Government to hold an overall majority after a landslide victory at the polls.

Mr Gray said: “I look back at being leader as an honour. It was a tough job but I do not regret doing it.

“The election result was disappointing and I had to taken responsibility for it but the people in East Lothian were a great support to me at that time and the local Labour Party were tremendous.”

And the 64-year-old believes that the Scottish Government has not given East Lothian the position it deserves over the last 14 years.

He said: “When it comes to investment, we always seem to be at the back of the queue.”

The veteran politician believes the first role of an MSP is to ‘stick up’ for constituents, and has been involved in local campaigns throughout his time in East Lothian.

He points to the fight for a railway station at East Linton, which is almost within grasp, and the failed battle to save Haddington Sheriff Court from closure, as examples of the great community spirit across the county.

He said: “The strength of our communities is incredible and starts with families and neighbours.

“There are people who have stayed in the county all their lives and know their neighbours. There are solid communities and the strength of their human networks is so much stronger than in other places.

“I am very proud to have served these communities and be a part of them.“

Mr Gray point to his own family as an example of how people who move to East Lothian find themselves integrated into the communities, adding “I have seven grandchildren, five of them living in Haddington!”

Despite his decision to retire, the former MSP has no plans to take it easy, with his focus still on East Lothian.

He plans to continue working with the Hibs charity which he has chaired and which is doing a lot of work in the county, and has taken a role with the Open University on an advisory group.

But he says his priority is spending more time with wife Gil and their family.

He said: “Politics can be quite tough and our families miss out sometimes. I plan to spend more time with them.”