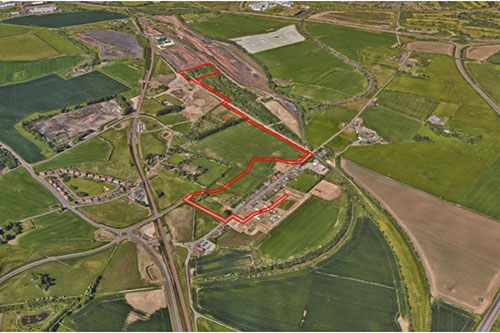 An aerial view shows where the centre will be based and run pipes into Shawfair.

A £20million ‘green’ energy project which will have the same carbon impact as taking 1200 cars off the road now looks set to be built next to a recycling plant in Midlothian.

The centre, which was initially planned to be built alongside the new Shawfair education campus, is now being considered for Millerhill, where it will sit beside its Recycling and Energy Recovery Centre (RERC) which will provide fuel for the heating network.

The local authority was asked to rule on whether the proposed centre, which will be built in woodlands next to Millerhill Marshalling Yard would need an environmental impact assessment before a planning application could be considered.

Although the proposed building is described as 12 metres high and 50m by 38m in size, and will require pipes to travel alongside woodlands to Shawfair, the council ruled it did not require the assessment.

A report on behalf of Vattenfall, lodged with the council acknowledged that the building would be in woodland.

However it said: “The proposed development site is located in woodland noted on the Native Woodland Inventory which will be cleared for building works, informed by a Tree Survey and retaining existing trees where possible.”

A map showing the planned route for pipes from the building to Shawfair shows them underground and running adjacent to a strip of woodlands.

Midllothian Council has signed up to a 40-year deal to provide heating for new public buildings in Shawfair after hailing its potential to reduce CO2 emissions.

The main source of energy to produce heat is expected to come from the recycling centre however a back up boiler will be in place in case of disruption to the supply.

The report said “the back-up boiler is to be electric-powered and required less than 876 hours per year, only during periods of maintenance or outage from the RERC facility.”

It is anticipated deals will be made with Shawfair developers to connect the network to homes and businesses in the new town as it develops.

The local authority’s hope for Shawfair is that eventually up to 3,000 homes will be connected to the local heating network.