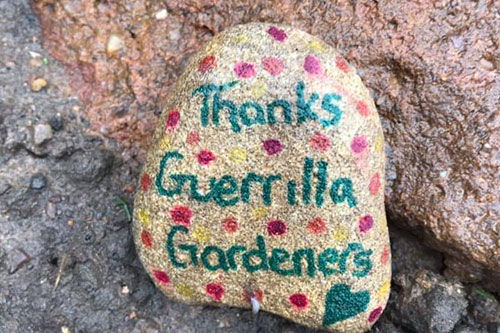 The story of a campaign to stop pesticides being used in a tight-knit community has been captured in a new book to raise money for a children’s memorial.

The rise of Danderhall and District Guerilla Gardeners and their impact on their village has been documented with the help of local historian James Burns Hogg and published by the group.

And funds raised from its sale will go towards the creation of a child miners memorial, after the group’s discovery of an old coalmine wall unearthed a pit disaster and first hand accounts of life working underground from children as young as 11.

The voluntary gardening group was set up in March this year as a campaign against Midlothian Council’s decision to reintroduce glyphosate weedkillers after a temporary halt.

It was the first community in Midlothian to have a Local Authority agreement to manage green community spaces to avoid the pesticide being sprayed on them.

Large numbers of volunteers turned out to help the group weed and maintain areas of the village and within a few months its ambitions expanded to ensuring more was done for Danderhall.

Working with developers overseeing the neighbouring Shawfair site the group has secured support to increase its aims.

During one weed clearing project they uncovered an historic buffer wall connected to Edmonstone Colliery.

The Coalfield Regeneration Trust became involved after the wall was uncovered and the history of the mine and its workers is set out in the new book along with accounts given by child miners to the children’s commissioner in the mid 19th century.

It also pays tribute to one of the pit survivors John Nicholson who was president of the secret Brotherhood of Colliers and later founded the Free Colliers union with local MP Alexander MacDonald.

Funds from the book, which cost £5, will help fund a child miners’ memorial at the site of the rediscovered wall.

The book went on sale on Wednesday, September 8, at the Co-op, Salon Sixty-Nine and Edmonstone Inn in Danderhall.

It can also be bought at Danderhall Miners Club this evening and again at their Welfare day on Sunday, September 12.

Copies will also be available at the guerilla gardeners regular Sunday volunteer sessions details of which can be found on their Facebook page.