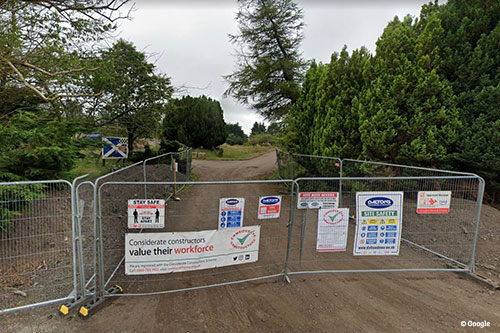 Plans to build a “new village” on a former school site in the countryside have been rejected by councillors amid claims they had a “gun put to their heads” to make a decision.

Midlothian Council’s planning committee delayed ruling on the Lochay Homes plans for 46 bungalows at the former Wellington School site near the village of Howgate at a meeting in November to allow a site visit to take place.

But developers reacted by lodging an appeal with Scottish Ministers urging them to step in and approve their plans after accusing the council of taking too long to make up its mind.

And after the planned site visit, which was due to take place ahead of a virtual meeting of the planning committee today, was cancelled due to Covid infection rates, councillors were warned delaying any further would risk them losing a voice in the plans.

Councillor Colin Cassidy told the committee meeting: “We are having a gun held to our heads to make a decision and we need more time.”

The Lochay Homes proposals for the school were first lodged with planners in February 2020, just weeks before the first lockdown, and several extensions were granted by developers to Midlothian Council to make a decision.

However when the last deadline passed on November 25 last year with the committee postponing a decision, developers lodged an appeal with Scottish Ministers citing the council’s failure to determine the application in time.

Planning officers had recommended the plans for approval despite local objections with the Wellington Action Group describing the new housing as creating an “isolated commuter desert”.

Concern over the impact of the new estate on Springfield Moss – a peat bog lying partly on the land, and moves to remove 15 matures trees in a protected zone to create a new access from the A701 were raised by objectors.

However developers argued the land was a brownfield site and pointed out it was included in the local authority’s Local Development Plan as an “additional housing” site.

At today’s meeting planning officers recommended councillors ask the Scottish Government Reporter to uphold the appeal against their own council and approve the plans.

However members were split over taking any decision without visiting the site itself.

Peter Arnsdorf, the council’s planning chief, said the site visit had been cancelled adding: “It was felt it was the right thing to do in terms of (Covid) infection rates in Midlothian.”

Mr Arnsdorf told the committee the council had been informed of the appeal to Scottish Minister on December 23 and asked to respond by January 6, with a request for an extension because of holidays and Covid rejected by the Scottish Government Reporter.

When pressed by councillors about the reaction should councillors ask for a further extension to allow a new site visit, he warned the committee it would be “a risk” with no guarantee the Reporter would accept their views.

Provost Peter Smaill told the committee that the council was “already on the naughty step” with the Reporter but added that if pressed to take a decision without a site visit he would have to refuse planning permission.

Local member Councillor Debbi McCall said she was “extremely disappointed” by the developers decision to go to Scottish Ministers .

She said: “They have taken locally elected representatives out of the process, it is a real shame.”

In an email shared by Midlothian planners with the Reporter as part of the appeal, agents for the developers said they felt compelled to take action as their agreement with the landowner – City of Edinburgh Council – lapsed on January 3.

And they indicated they might withdraw the appeal, although Mr Arnsdorf told the committee that decision could depend on its decision.

At the end of the debate eight councillors voted to reject officers’ recommendations and instead ask the Reporter to reject the appeal, four councillors supported the application with four members abstaining due to a lack of site visit.

Councillor Stephen Curran who abstained said: “I want it on record that I am disappointed we have not been given the time to have a site visit.”

And council leader Derek Milligan, who backed refusing the application, added his disappointment over the deadlines given to the council by the Reporter to respond.