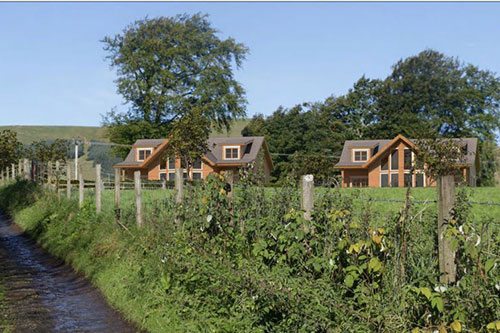 Photomontage of how the holiday lodges at Peggyslea Farm would look.

Planners refused to give the green light to two holiday lodges at a Penicuik farm because they faced the wrong way.

The proposals to add two self-catering chalets to a B&B business at the farm had been granted planning permission in principle by Midlothian Council.

But when detailed proposals were put forward for approval they were rejected as planners described the cabins as ‘standard kit’ and objected to their position.

Rejecting the proposals at the later stage, planners said the applicants had been advised of their concerns ahead of applying for detailed plans to be approved.

They said: “It is crucial the proposed location and siting of new housing considers the impact on the landscape, in terms of both immediate and wider surroundings.

“Attention should be paid to established building lines and orientation of any buildings in the area.

“Taking this into consideration, the lodges should be positioned to face the road as this would better reflect development in the wider area.”

Planners said other houses in the surrounding area and Nine Mile Burn largely have either front or gables “addressing the road they are accessed from”.

And they said concerns about the position of the lodges had been raised prior to the plans being lodged.

However they said: “The revised plans show the lodges positioned parallel to the west boundary, perpendicular to the road.

“This repositioning does not reflect the general character of houses in the surrounding area and is not supported.”

Agents for the owners of Peggyslea Farm at Nine Mile Burn said they had been operating a bed & breakfast business at the farm since 2009 and were presently at full capacity. They said the two holiday lodges would provide additional self-catering accommodation.

And they argued the lodges were “in keeping with the character of the local area”.

They said: “They are sited and designed to respect the character of the local area and located in an unobtrusive manner within the rural landscape.”

However planners described the lodges as “relatively large and bulky” and said they had passed concerns to agents who had agreed to amend the proposals, but the plans put forward for approval were not revised from the originals.

They said: “The proposed lodges are relatively large and bulky, of an unusual scale and proportions with projecting areas and dormer features.

“These appear to be standard kit lodge, rather than designed for the specific site or local vernacular.”

Refusing permission to go ahead with the plans to build the lodges the council told the applicans’ agents: “The position of the lodges does not respect or reflect the general character of houses in the area.”