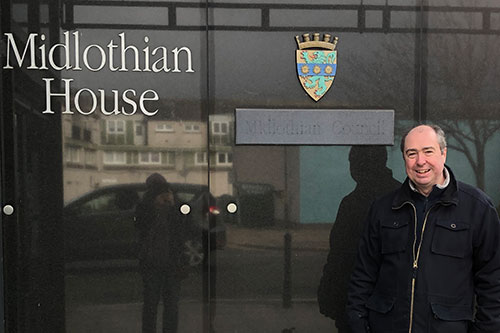 Midlothian View Holyrood Challenge: This View has been written by Iain Whyte, the Scottish Conservatives and Unionist Party's candidate in the Midlothian North & Musselburgh constituency for the Scottish Elections on Thursday May 6th 2021

Everywhere I campaign in Midlothian it’s really obvious how much the population is growing with all the new housebuilding. This is building fantastic new communities but residents are also very clear in pointing out to me the impact on already stretched local public services.

This pressure comes on the back of years of cuts to Council budgets imposed by the SNP government during their 14 years in office. The Scottish Government’s Budget has increased by nine per cent since 2011-12, yet they have hammered local councils with a 17 per cent real terms cut in their revenue funding.

Here in Midlothian the impact is a cut of £7.1m in spending power or 5%. That’s had a really negative impact recently as Midlothian Council has been on the frontline against this pandemic and, long term, means a failure to increase local services and infrastructure to the levels needed for the extra housing. Services like schools, road and pavement repairs, waste collection and combatting fly-tipping.

Local councils provide the services in communities that people rely on every day. It’s a disgrace that the SNP Government have never been interested in supporting our councils despite having the funds from the UK Government to do so. Devolution should not stop at Holyrood. That’s why I want to guarantee a fair funding deal for Midlothian.