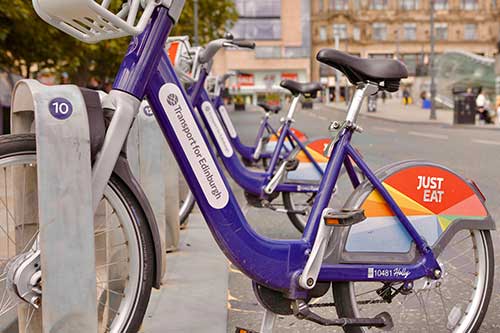 Edinburgh’s ‘Just Eat’ cycles are set to disappear from the capital’s streets next month, after the council’s contractor walked away from the project.

In 2018, Edinburgh City Council contracted Hampshire business giant Serco to run its bike hire scheme, with transport bosses promising the ‘innovative’ scheme would be a ‘huge success’ for the city.

The scheme was supposed to be self-financing, with revenue generated from bike rentals and sponsorship from Just Eat, but the scheme has been plagued by vandalism and theft which has pushed up costs.

In May, councillors sitting on the council’s finance committee were warned that Serco were not willing to extend the contract due to the financial risk, and in the ensuing months the council has not been able to agree terms with the government contractor.

Now, the council says it is investigating alternative options to replace the scheme.

Council leader Adam McVey said: “We are very disappointed that Serco have opted to walk away from the popular shared bike hire scheme in Edinburgh.

“When the bike hire scheme was first introduced the commitment was to operate it with no public funding and it is highly regrettable that Serco will not continue the scheme on that basis.

“The council recognises that the bike hire scheme has helped more people get access to bikes, enjoying the benefits of fast, reliable, healthier journeys around town.

“The withdrawal of Serco will come as a frustrating shock to many regular users of the bike hire scheme.

“It sends absolutely the wrong message at a time when so many of us are deeply concerned about the climate emergency and what we can each do to combat the effects of human activity.

“Choosing to travel by bike is one of the easiest changes many of us can take.

“The council is now working on a replacement bike hire scheme for the capital.

“We are actively pursuing options to ensure that a replacement scheme is in place as quickly as possible.”

“Over the past few years it’s been a welcome sight to see residents, students and visitors making journeys from A to B across Edinburgh by hire bike and they’ve become a key part of our sustainable transport infrastructure in the city.

“The city will share our huge disappointment that the scheme is coming to an end and that Serco have walked away from a key part of the city’s active travel plans.

“We will now engage with the cycling community to look at alternative innovative schemes to get people back on the bikes.”