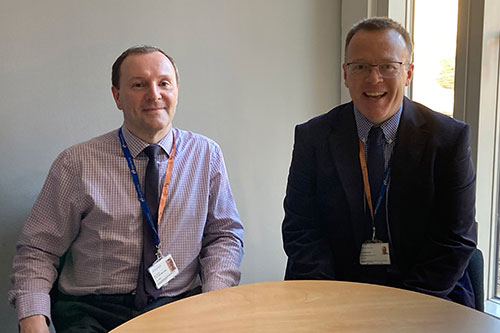 Dalkeith-based Melville Housing Association, a leading provider of affordable housing across the Lothians, Edinburgh and Lanarkshire, has become the first social landlord in central Scotland to achieve the Scottish National Standard for Information and Advice Providers for a fourth time.

First awarded to Melville in 2009, the National Standard recognises the quality of work delivered in welfare benefits advice and is run by the Scottish Government. It was this year achieved by Melville’s new team of Andrew Collinge and John Scott following the retirement of long-standing adviser Jacquie Mather.

“Congratulations to Andrew and John for achieving the Standard once again,” said Melville chief executive John McMorrow. “In what has been a tough year for many of our customers, demands on the service have been exceptional, but Andrew and John have stepped up and delivered while at the same time doing the additional work needed to demonstrate the service meets the Standard’s stringent requirements. We’re delighted that the Scottish Government continues to recognise this through Scottish National Standard accreditation.”

“It was as if nothing was too much trouble, even on days when my mental health wasn’t too good, they understood and got back in touch later when I felt more able to cope,” said one grateful Melville tenant. “I couldn’t have done it on my own. They never made me feel stupid when I didn’t really understand things on forms, I hope other tenants have been helped as much.”

Over the course of the past year Melville’s two dedicated welfare benefits advisers helped 88 households claim more than £778,000 of benefits to which they were entitled, an average of over £8,800 each.