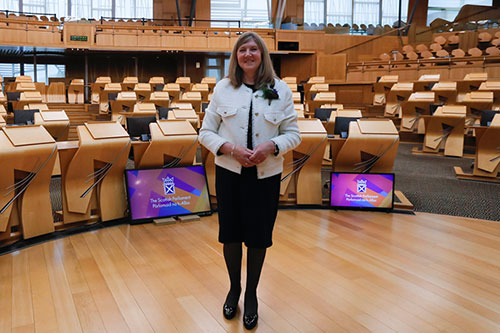 Lothian MSP, Alison Johnstone, has been elected as the Scottish Parliament’s sixth Presiding Officer. Ms Johnstone is the first Green MSP to be elected to the role.

In her acceptance speech the new Presiding Officer thanked her colleagues for electing her to the position in what she called an “opportunity and a privilege”.

“I am so proud to have been elected as the Parliament’s sixth Presiding Officer.

“This is an incredibly important time for the country and I want to ensure that the Parliament is a place of open debate but we do that in an environment of mutual tolerance and respect.

“The Parliament is such an important place for not just me, but for people across Scotland. This is our most diverse Parliament yet, but there is still more to do, and I want to make sure that the Parliament is representative of all the people it serves.

“There is no doubt that we face some major challenges ahead including the pandemic and of course climate change. I want to ensure this Parliament and all its Members have the opportunity to work together to address these vital issues.”

Ms Johnstone was the only nomination for the post.

Alison Johnstone was first elected to represent the Lothians Region in 2011, and was a Councillor on City of Edinburgh Council before her election as an MSP.

She is a qualified athletics coach and previously held the East of Scotland titles for the 800m and 1500m.