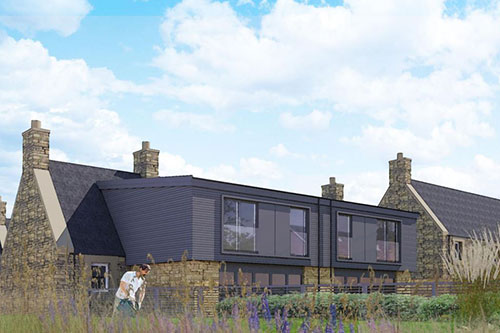 Artist's impression of the proposed extension at the house in Pathhead.

A cottage extension would look more in place on a Malibu beach house than a conservation village, councillors were told at a meeting this week.

Plans to add the extension to a listed building on Pathhead Main Street to help divide it into two properties were described by local councillor Peter Smaill as “aggressively modern”.

He urged fellow planning committee members to refuse the proposal which he said would set “an unfortunate precedent” for the village.

Speaking at a virtual meeting of Midlothian Council’s planning committee, Mr Smaill, said he called in the application over concerns about the impact of the extension.

He said: “This is a listed house in a small conservation village. It would be better suited to an executive estate or a Malibu beach house.

“It is completely out of keep with the rest of the high street.”

The proposals would sub divide the house into two separate cottages with the extension at the rear of the property.

Peter Arnsdorf, planning manager, said planning officers recommended the application for approval because the extension is at the rear and “very discreet”.

He added that guidance over conservation areas does not mean new buildings have to be a “replica or pastiche” of traditional buildings adding it was more about judgement.

However Councillor Smaill said: “It is a matter of judgement and in my view this is too aggressively modern to fit in with Pathhead.”

He urged members to send the architect back to the drawing board by refusing the application.

Council leader Derek Milligan backed officers’ recommendations to approve the extension, adding any concerns were down to personal taste rather than planning judgement.

And Councillor John Hackett agreed, saying: “I do not feel I can impose my taste on it but I am moved by some of the comments made.”

The committee voted by seven votes to three to approve the planning application.