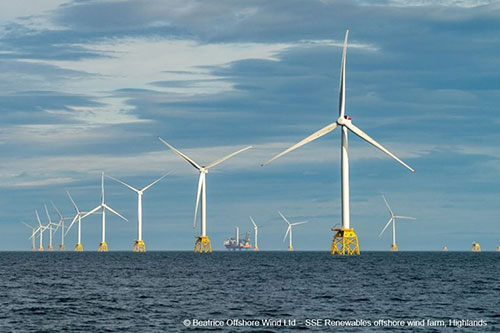 One of the largest offshore windfarms in the world could be created off Berwickshire’s coastline, if a new planning bid gets the green light from the Scottish Government.

A government scoping opinion report has been submitted to Scottish Borders Council’s planning department for consultation on the Berwick Bank windfarm, which would be located around 20 miles east of St Abbs Head.

The windfarm is set to comprise up to 307 wind turbine generators and associated support structures and foundations, with a maximum rotor blade diameter to be no greater than 310 metres and a minimum blade tip height of 355m.

Energy company SSE Renewables has taken steps in the planning process to reduce the environmental impact of the 4100MW windfarm on seabird populations.

Following feedback from stakeholders, the company is no longer looking to develop the entire area of Berwick Bank.

Instead, it will reduce the overall size of the site by around 10 per cent compared to the area available for development in order to mitigate the potential impact on local seabird populations.

It is also proposed to raise the minimum height of the turbine blades from 22 metres to 37 metres above sea level to address bird passage through the site.

“Berwick Bank is deliverable now and is essential if Scotland is to be successful in meeting the Scottish Government targets of 11GW new offshore wind by 2030.”

At a meeting of Scottish Borders Council last month concern was raised that a government drive to push ahead with further onshore wind turbine developments would prove a ‘significant ask’ for the region, which has already seen more than 500 windfarms approved.

Scottish Borders Council, alongside East Lothian and Fife local authorities, Berwick-upon-Tweed Town Council and Eyemouth Fishery Office are among the dozens of organisations being consulted over the plans.

But ultimate approval for the scheme rests with Scottish Government ministers.