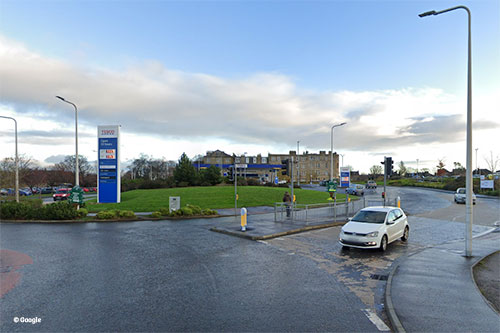 The site next to Tesco off Olivebank Road in Musselburgh.

McDonald’s has lost its fight to open a drive-thru in Musselburgh after an appeal to Scottish Ministers was thrown out over concerns from police about anti-social behaviour.

East Lothian’s police chief was among those objecting to the proposed drive-thru, which would have been within walking distance of the town’s secondary school.

He warned that an increase in antisocial behaviour had been seen around branches of the fast food chain operating in his district.

And the Scottish Government Reporter acknowledged the “clearly expressed professional opinion of the Local Area Commander” in reaching a decision on the appeal.

McDonald’s appealed to Scottish Ministers to grant planning permission for the drive-thru off Olivebank Road in the town, and next to Tesco, after East Lothian councillors refused to give it the go-ahead at a meeting last August.

Local residents had campaigned against the 24/7 drive-thru which they said would create additional traffic in a congested town centre, attract antisocial behaviour and create noise disturbance for nearby residents.

Chief Inspector Neil Mitchell, area commander for Police Scotland, was asked to submit his view by the Reporter and said that an increase in complaints had been seen when the the fast food chain opened branches in Dunbar, Dalkeith and Loanhead.

He said: “Should the application be granted, we would expect to see a rise in complaints of anti-social behaviour and public nuisance.”

McDonald’s had disputed the claims arguing antisocial behaviour was a “societal problem” and not linked to the restaurant chain which worked with police to address any issues.

Councillors had refused planning permission amid concerns over the proximity of the drive-thru to Musselburgh Grammar School as well as residential properties.
The drive-thru was described as a ‘180-second walk’ from the secondary school by local ward councillors and the Reporter acknowledged on a site visit witnessing the footfall of pupils to and from the adjoining Tesco store.

Musselburgh Area Partnership and Musselburgh and Inveresk Community Council both objected to the plans, which drew 157 objections and two statements of support.

Throwing out the appeal by McDonald’s the Reporter said that he had taken into account the views of local residents alongside the economic impact of the restaurant which was expected to create more than 60 jobs.

But he said: “Overall, I do not consider that the economic benefits would justify the adverse impacts I have identified. “