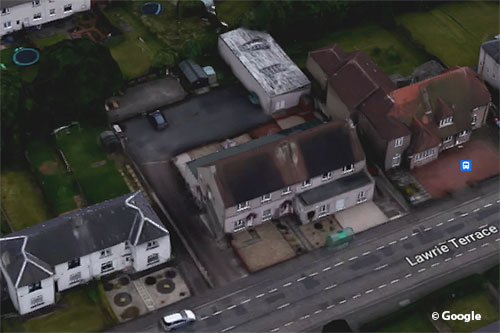 The church at the rear of houses in Lawrie Terrace, Loanhead.


A small church, which opened its doors in a former warehouse in a residential Midlothian estate, faces closure after it was refused permission to operate.

It has been operating from Lawrie Terrace, Loanhead, and applied for retrospective planning permission for a change of use of the former storage unit from Midlothian Council.

However planners rejected the application after receiving complaints from residents who said they were unable to use their gardens and had complained to the council and police about noise, parking and abuse from churchgoers.

In a statement they said they had taken action to mitigate noise from the centre as well as instructing users to park in nearby streets.

They said a report by sound experts EH Acoustics had said that “if complied fully, and the drums removed, this would meet standards.”

The church described itself as a religious charity.

It said: “Salem have given a source of support to local families through their activities.

“There have been complaints of noise at times, however they have engaged specialists, specialists who survey churches for sound reduction measures, and taken the mitigation steps recommended.”

The review body was told up to 60 people at any one time attended events at the church which was accessed through a communal path past homes and sat in the middle of residential flats and houses.

Councillor Colin Cassidy, review body member, said the change from a warehouse to potentially 60 people “traipsing in and out every day with singing and musical instruments playing” was a major noise concern.

And fellow councillor Connor McManus raised concerns over the path to the church passing people’s homes.

He said: “It must be a privacy issue. I am not sure 60 people passing regularly is particularly appropriate in front of people’s gardens.”

A report by planning officers said the change of use had received three formal objections with claims the church had been operating in the building for three years and complaints about noise had been made to the council’s Environmental Health team and the police.

One resident said they would not have bought their home if they had known the warehouse building would be operating as a church.

Councillor Dianne Alexander also raised concerns at the review body over the single door entrance in and out of the building, which she said could be dangerous in the event of a fire.

The review body rejected the appeal against the decision to refuse planning permission for church use of the building.

Salem International Christian Centre was founded by Dr Sam Amaga in Abuja, Nigeria, more than 30 yeas ago and he is the presiding archbishop of Foundation Faith Church Worldwide which has centres across the globe.