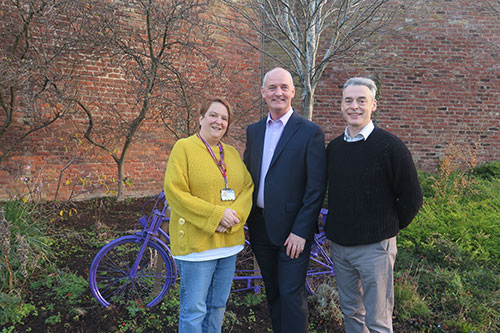 Midlothian Council is the first housing organisation in Scotland to sign up as a partner agency with the charity, Veterans Housing Scotland, in support of its new campaign to provide 25 more homes for disabled veterans across the country.

The council will allocate and maintain two properties a year for nominated disabled veterans and their families. The first family could be in their home before Christmas.

Veterans Housing Scotland will look after the wellbeing needs of the tenants.

Midlothian Council’s Cabinet Member for Housing Councillor Stuart McKenzie met with the Chief Executive of Veterans Housing Scotland, Kevin Gray, and the council’s Housing Team Leader, Alex Marks, this week before the council was honoured at a special campaign launch event in Edinburgh.

“We’re honoured to be working in partnership with Veterans Housing Scotland.

“With Glencorse Barracks in Penicuik within our county, we have a long tradition of supporting the Armed Forces. We are proud of their contribution and, in return, we provide support on a range of issues to serving personnel, veterans, reservists and their families within our community and our workforce.

“This new agreement with Veterans Housing Scotland to provide and maintain two homes per year for nominated disabled veterans is another important opportunity for us to help those who have served their country.

“Many of veterans can struggle when they leave the Armed Forces and evidence suggests secure housing can minimise tenancy breakdowns, prevent homelessness and promote stable and sustainable communities.”

“We are delighted to be working with Midlothian Council on our 25 by 25 campaign.

“The council received the first certificate given to supporters of our campaign and we are confident that other housing providers will follow their lead. Working in partnership with local authorities and housing providers we will deliver 25 more homes for veterans by 2025.”

Since its inception in 1915, Veterans Housing Scotland has a long and proud history and tradition, the charity has helped thousands of disabled veterans and is focussed and determined on continuing its work into the 21st Century.

Through the Second World War, Korea, The Falklands and, more recently, Iraq and Afghanistan, VHS has been ready and now supports over 650 veterans who are disabled.

The ’25 more homes for veterans in Scotland by 2025’ campaign is based on detailed research undertaken on its behalf. The date 2025 will mark the charity’s 110th anniversary.

One of the first initiatives to be introduced as part of ’25 by 25’ is the Tenancy Sustainment Service as recommended in the Veterans’ Homelessness Prevention Pathway published early in 2022. The introduction of Visiting Officers is a key part of this activity. Following a very successful pilot exercise VHS now plans to introduce a wider team to support tenants across Scotland.