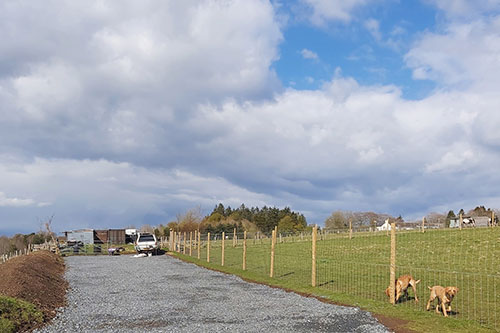 The Stackyard Park dog fields can now open for business.

Concerns about a country lane being used to access a dog park were dismissed by councillors after a virtual drive up it convinced them it was no different to any other rural roads.

Midlothian planning officers had refused permission for The Stackyard Park secure dog fields to open at a former livery yard because it was off a single lane.

However councillors who were taken through a Google Maps virtual drive up the road in question ruled it was the same as many country lanes in the county which were part of “everyday life”.

A meeting of the council’s Local Review Body was told the dog park business which is based off Milkhall Road, near the former Wellington School on the outskirts of Penicuik, had received more than 40 letters of support and just two objections when it was initially proposed.

However planners rejected it on the ground that the single lane which had previously served school traffic, was not suitable for a new business.

At the virtual meeting of the review body today planners revealed a further ten letters of support had been received since the appeal was lodged along with three objections.

Applicant Caroline Wilson said in an appeal statement that her family had been involved with land at Wellington since she was 13 years old and bought The Stackyard Park 20 years ago.

She said during the first decade of ownership attempts to gain planning permission for a house in the site were rejected until an appeal in 2012.

But she said since then her parents had sunk their life savings into trying to get the property built by she said were still battling planners over building control issues a decade on.

Appealing for support for the change of use of the site from a stud farm to dog park, she expressed frustration at seeing other developments given the go ahead in neighbouring land for both housing and landfill.

And she said the dumping of unscreened soil at a landfill next to the fields she used had led to toxic Horsetail weed which is poisonous to the animals spreading.

She said the loss of savings and cost of trying to eradicate the weed meant the need to diversify to try and recoup some funds had become necessary and the dog park, which had received huge support, was an alternative.

She said: “All I am asking for is to earn a living on my land, to try and give my parents back their life savings spent.”

Members of the review body expressed concern about people accessing the lane known as Milkhall Road, from busy main routes which it links to – the A701 and A6094, however they were told the planning officers refusal of permission was solely on the state of Milkhall Road itself.

The Google Maps tour showed several passing places on a straight single lane road from the A701 to the entrance to the site.

Provost Peter Smaill told he Local review Body: “It is like many roads in rural Midlothian. I don’t think we have sufficient reason to uphold (officers) objections.”

He was backed by council leader Councillor Derek Milligan who said: “There is a great demand for this type of facility and quite clearly there is safe access to it.

“There are numerous roads like this all over Midlothian that that are driven through on a daily basis.”

The review body agreed unanimously to uphold the appeal with an additional condition that advertising for the business would promote access from the A701.

An application to build more than 50 new houses on the former Wellington School site, next to the dog park, is due to be discussed at the council’s planning committee tomorrow and has been recommended for approval by officers.