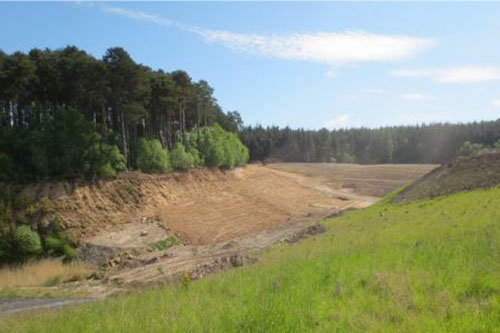 The landfill site at Drummond Moor will become a holiday resort.

A new holiday retreat on a landfill site could bring more than £4 million to the economy, it is being claimed, after it was given the go ahead by councillors.

The 62-lodge plans by FCC Environment, will see accommodation built around the landfill at Drummond Moor, which lies to the south of the former Rosslynlee Hospital, in the council.

The former quarry will have footpaths and picnic areas created on the landfill site itself .

A meeting of Midlothian Council’s planning committee was told that Rosewell and District Community Council had raised concerns over claims by developers that £4.1million would be brought into the economy by the proposal.

Commenting on the plans the community council said:

“An estimate of £4.1 million has been given as the economic benefit of this proposed development to Midlothian, but it’s not clear how much of this spending will be in Midlothian as the planning statement claims the proposed development would be “easily accessible from major and minor regional road networks but only c.16km (30 minutes’ drive) from central Edinburgh, a major and international tourist destination”.

Concerns were also raised about a lack of public transport serving the site and guests and workers being reliant on cars to get there.

However the community council added: “a number of residents are supportive of this proposed development, citing employment opportunities and prosperity to the area.”

Planning officers recommended the committee approve the plans with Peter Arnsdorf, planning manager, saying he was “optimistic” the project would be a success.

The development will comprise a mixture of four to eight person lodges and include a reception and facilities building.

Councillors agreed to approve the planning application subject to conditions.