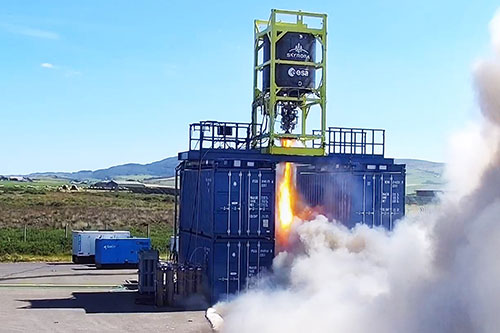 The monumental event, at Discover Space UK at Machrihanish Airbase on the Mull of Kintyre, was the largest integrated stage test in the UK for 50 years, since the days of the Black Arrow and Blue Streak rockets which were cancelled in the seventies without ever going into production.

The test at the Scottish base was made possible as a result of funding received by Skyrora as part of the European Space Agency’s Commercial Space Transportation Programme as well as support from the UK Space Agency,

It involved hot firing the second stage engine of Skyrora XL to prove the vehicle’s operational capability for its intended payloads and to ensure that its performance met all the design requirements.

The test was successfully completed with all systems nominal throughout the 20-second burn and the single 70kN liquid engine operated within its design margins and achieved the expected thrust which will carry it into space.

The latest achievement moves the company another step towards commercial operation, and its inaugural orbital launch is now scheduled for 2023 from the SaxaVord Space Centre on Unst, the most northerly of the Shetland Islands.

Volodymyr Levykin, Founder and CEO of Skyrora, said: “With the UK striving to capture a 10% share of the global space market by 2030, the successful Skyrora XL second stage static fire test puts Skyrora on track to become a key part of the UK’s new space industry as the first British company to conduct vertical launch from UK soil.

“Skyrora now has purpose-built rocket manufacturing and testing facilities in the UK – as well as the largest 3D printer of its kind, which we are using to produce rocket engine components.

“We recognise the value that a strong domestic space industry will bring to the UK, and we will continue to spearhead these efforts to make the UK a player to be reckoned with globally.”

The successful test is the latest important stride for Skyrora, following the opening last month of a new manufacturing and production facility, the largest of its kind in the UK, in Cumbernauld, North Lanarkshire, and the recent opening of an engine test facility in Midlothian.

The new facility in Cumbernauld allows the company to concentrate its launch development practices in custom-built domestic facilities, further strengthening Skyrora’s status as the leader in the UK space race.

Colonel Lee Rosen (USAF, Retd.), Skyrora COO and former SpaceX Vice-President, said: “The static fire test looks, sounds and feels a lot like a rocket launch, but without lifting off. This hugely successful test was a definitive demonstration of our mobility and flexibility. The Skyrora team went from clean tarmac to a full static fire test in just 2.5 days, bringing all the necessary equipment with them.”

Matt Archer, Director of Commercial Spaceflight at the UK Space Agency, said: “As we soar towards the UK’s first commercial space launches, these achievements showcase our rapidly growing capabilities, and the increasing range of expertise that can make the UK a highly attractive destination for launch activities in Europe. We’ll continue to support the development of new launch infrastructure and technology and look forward to following the next steps of Skyrora’s journey to orbit.”

Thilo Kranz, Commercial Space Transportation Programme Manager at the European Space Agency, said: “It has been excellent to witness the successful second stage test for the Skyrora XL launch vehicle. This test is also an important step towards ESA’s objective of fostering new commercial European launch services in the near future.”

Andy Grey, Member of the Board at Discover Space UK, said: “Discover Space UK is delighted to host exciting companies such as Skyrora, which are developing new capabilities within the UK’s emerging spaceflight industry, as part of UK ambitions to be a science and technology superpower. DSUK wants to see the future of science and industry coming to Machrihanish and benefiting from our fantastic infrastructure and landscape.”

Machrihanish Airbase is a former military base which hosted a US Air Force detachment of strategic bombers during WW2 and was used by RAF and NATO air forces until 1997. The airstrip at Machrihanish was also a designated emergency landing site during NASA’s space shuttle era.